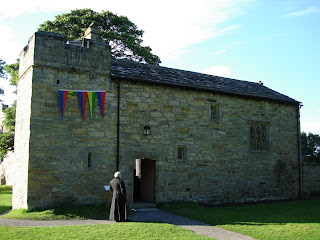 Last night I went to Dilston to celebrate Mass. It was a lovely summer`s evening and the Tyne valley looked stunning. It was good to see about six or seven parishioners from St Mary`s there as well as others with an interest in Dilston or enthusiasts for the Extraordinary Form. There must have been about thirty people in the tiny chapel including the choir.
When I got there, having prepared something to say about St Mary Magdalene, I was told that that was the chapel`s dedication which was a more than happy coincidence. It is two year`s since I last said Mass at Dilston but I hope to go again next year. I am happy to report that there is now a more serviceable table to be used as an altar together with it`s own frontal. I only took four candlesticks as I remember the altar last time being very small indeed but while it was still quite small it was manageable.
The choir stalls that can be seen in the picture were added when the church was taken over for Anglican worship after the Radcliffes left the site. Being built in 1616 for Catholic worship this chapel is certainly the oldest post-Reformation Catholic chapel in the diocese and I wonder how many others there are in the country of a similar vintage? It is now owned by the North Pennines Heritage Trust and was deconsecrated for Anglican worship quite a while ago. We had a retiring collection for the Friends of Historic Dilston on whose website there is a great deal of information about Dilston and the Radcliffes. 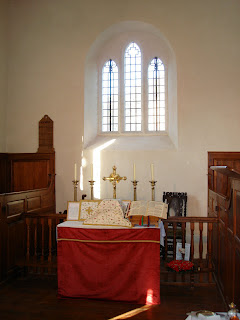 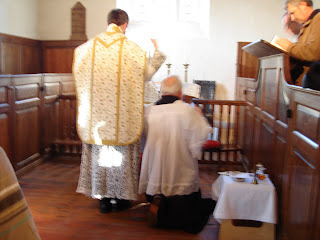 I`m afraid the altar only has one frontal. Last time there wasn`t one at all.

Ah! Hopefully the lack of choice of altar vestments was made up for by something good like Credo VI?

I recall the 'Glover' altar at the University of Durham Debating Chamber. The altar was constructed like a paste table but one year the brackets used to secure it went missing. An ingenious support of chairs was utilised that made the 'mensa' very stable. The whole thing was covered in black cloth on all four sides and then vested as appropriate. Showing one rather eccentric friend the photographs he was horrified to see the black cloth on Good Friday. I explained it hid four chairs - 'I'd rather see the chairs and no cloth' was his response - not that is what I would call a purist.

No creed for Mary Magdalene. Your purist friend must find life very disappointing.

No Creed! Now that does shock me. In marketing terms the Creed for a holy woman was the USP for St. Mary Magdalene's feast, making it unique in the old rite.

My friend in question is, sadly, is in a care home now. However, both he and I learnt a long time ago the value of avoiding disappointing situations in life and the importance of rather focusing attention on those places where a more satisfactory experience could be predicted.