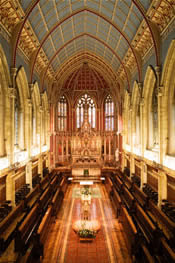 I have been reading the new issue of the Northern Catholic History magazine. This year marks the bi-centenary of the college. Fr David Milburn has an article in about the celebrations of the first centenary which I`ve just finished. There was a major celebration at Ushaw in 1894 to mark the centenary of the establishment of the seminary at Crook Hall after the closure of Douai. Fr Milburn writes that for Ushaw 1794 was a date of greater significance than 1808 as it marked the start of seminary training in the North. What particularly interested me was the choice of music.
For the main Mass of the 1894 celebrations held on Sunday 14th October celebrated by bishop Wilkinson of Hexham and Newcastle, in the presence of three archbishops (Westminster, Glasgow and Edinburgh: the archbishop of Glasgow, Charles Eyre, had been a priest of Hexham and Newcastle.). Fr Milburn writes of the music:
The music chosen and sung by the college choir included the Gloria from Haydn`s second Mass, the credo from Gounod`s Messe Solonnelle de Ste Cecilie and the remainder from Adolf Kaim`s Mass of St Cecilia with the offertory piece, Confirma Hoc Deus by the popular J. Richardson.
The Tablet correspondent wrote:
The music was throughout rendered with a most impressive mass of voices and an admirable balance of parts in the harmony; the glorious burst of thanksgiving at the opening of the Gloria being most effective, the bass solo at the Qui tollis being rendered with a deeply rich and sympathetic quality.

I was interested to know what music was sung at the 1908 celebration in the aftermath of St Pius X`s Tra le Sollecitudini (Instruction on Sacred Music) of 1903 which condemned operatic Mass settings. While writing this article Fr Milburn rang and I asked him about it and he thought there wasn`t a record of the music for that occasion but that it took Ushaw a long time to catch up with this and that Gregorian chant didn`t get seriously under way at Ushaw until the 1930`s although there had been some experiments in the 1890`s.
Fr Milburn writes that at the 1908 celebrations Canon Billington declared that the recent papal writ against Modernism had no need to be served on Ushaw because the Ushaw spirit was famous for its simplicity and loyalty. I wonder what the reaction had then been to the 1903 instruction? In watching the two films of High Mass at Ushaw from 1960 and 1962 it is interesting to see the new rubrics of the 1962 missal being observed on the later film so there was no delay in following the latest directives there. I wonder if there is any evidence for the reaction to Pius X`s instruction in the years before chant really got under way at Ushaw with Canon Hollis?
Posted by Fr Michael Brown at 10:51 am

Kaim's Mass of St Cecilia! We used to sing that years ago. I wish I had a copy of it now. All the old music was burnt in the 1980s, long after I'd left the parish. Have tried the internet to no avail.

I don't suppose you know if Ushaw still has the setting in its archives somewhere?

We also used to sing a lovely setting of O Esca Viatorum, which was a manuscript copy known as the 'Ushaw tune'! I still have somewhere (in the stuff I purloined for safe-keeping!)

I`m glad someone has heard of Kaim! I have no idea what if anything is left of the Ushaw music archive. I`ll try to find out.

You might find this link helpful as it mentions Adolfo Kaim. It is from a site 'Music for the Nation. American Sheet Music.

Apologies - I hit the send button too quickly. If you try Adolfo (ending with an 'o') Kaim on Google or Yahoo you will find some useful information.

Father and Anonymous - thank you, both.

Some time ago I managed to get some info on Kaim and was able to download a copy of his 'Missa Iesu Redemptor' (another of his Masses we used to sing), but the St Cecilia Mass was most elusive.

I'll have a look at the recommended site. If Ushaw did happen to still have the St Cecilia Mass in its archives that would be wonderful.

Mr Brian Passman, an Ushaw alumnus, has recently had some old 78s of chant at Ushaw from 1949-53 digitally remastered and put on to CD. He is selling them for charity. If you are interested, I will send you his details.

I have just sent off an article on the bicentenary celebrations, which will appear in 'Catholic Life' for October.

Thanks Ben. I used to have a cassette tape of something similar but a CD would be better. What I don`t understand is why Ushaw doesn`t sell copies of the films of High Masses made in 1960 and 1962.

Father, is it possible to obtain or download copies of the High Masses at Ushaw from 1960 and 1962? Michael Gormally.