Proof the shroud is not medieval

Good news from Andrea Tornielli on the Vatican Insider site. New tests have identified the Turin Shroud as being of first century AD provenance. The article is here. An excerpt:

The new tests carried out in the University of Padua labs were carried out by a number of university professors from various Italian universities and agree that the Shroud dates back to the period when Jesus Christ was crucified in Jerusalem. Final results show that the Shroud fibres examined produced the following dates, all of which are 95% certain and centuries away from the medieval dating obtained with Carbon-14 testing in 1988: the dates given to the Shroud after FT-IR testing, is 300 BC ±400, 200 BC ±500 after Raman testing and 400 AD ±400 after multi-parametric mechanical testing. The average of all three dates is 33 BC  ±250 years. The book’s authors observed that the uncertainty of this date is less than the single uncertainties and the date is compatible with the historic date of Jesus’ death on the cross, which historians claim occurred in 30 AD.

More in the Telegraph.

`Can you say that I'm too old, when the angels have stolen my red shoes?`

I wasn`t too fussed that Pope Francis had decided not to wear the papal red shoes. After this post by the FSSR I`m beginning to think again. I didn`t think papal non-liturgical garb was formalised in the first millennium but I want to look into this more. If it`s true I`d be very sad to see the end of a tradition with such long roots.

On the other hand I can`t get this song out of my head at the minute.

Apologies to all those who don`t like Elvis Costello.
Posted by Fr Michael Brown at 11:18 am 1 comment:

The FSSP and Longbenton 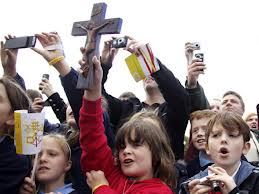 Sadly this is not to announce that the FSSP (Priestly Fraternity of St Peter) have been given a church in the diocese of Hexham and Newcastle. While we have a few redundant churches I think we will wait a long time before our diocese catches up with the universal Church and is open to Ecclesia Dei societies. No, what it is is that I recently received the new issue of the FSSP quarterly magazine `Dowry` and was surprised to see a photo on page 8 of children from St Stephen`s primary with their inspirational headteacher, Mr Fallon, at Twickenham for the papal visit in 2010 as part of an article on Catholic education! The whole magazine is available online and can be found here.
Posted by Fr Michael Brown at 3:00 pm 2 comments: 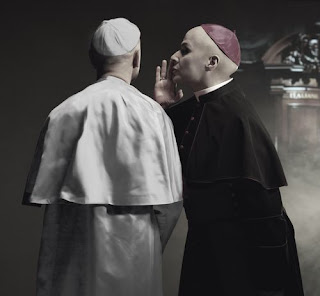 When there were such things as well-stocked classical CD shops, I often used to browse and always looked through the Monteverdi section just in case someone had found one of his lost operas and recorded it without me knowing. I love the music of Monteverdi from Orfeo to the 1610 Vespers, the eighth book of madrigals and the coronation of Poppea.  And he became a priest for the last eleven years of his life! Only three of his eighteen operas survive. I have listened to operas by his contemporaries such as Cavalli and Cesti but they are not in the same league.
So I was intrigued to read on the Intermezzo music blog that Cecilia Bartoli believes that they may survive in the Vatican library. Miss Bartoli has a difficult relationship with the church in that she turned down an opportunity to sing at the Vatican because she would not divulge her views on abortion. Her latest CD, Mission, dedicated to the music of Agostino Steffani, Italian bishop and papal diplomat of the late seventeenth century, has numerous bizarre pictures in the accompanying leaflet of Miss Bartoli with shaven head dressed as a bishop!
However Intermezzo points out that Pope Francis is an opera-lover so maybe he will be sympathetic to the suggestion. Although there again he may have one or two other things to think about at the minute....
Posted by Fr Michael Brown at 12:11 pm 8 comments:

Well I said I was at a loss to know who I would like for Pope. The election of Pope Francis was a bigger surprise than I expected. To start with he is a lot older than I thought we were due. I didn`t think we were going to have another `caretaker` pope. Secondly I felt sad that he chose not to wear the rochet and mozzetta on the balcony and didn`t sing the blessing etc, all of which has been commented on elsewhere.

However as Fr Somerville-Knapman says:

Pope Francis might not be the pope I was hoping for, but he seems like the pope we all need.

Certainly his preaching style is quite a change. We`ve grown used to papal preaching being delievered from a prepared text. Pope Francis doesn`t seem to use notes. As this video shows he is not shy with crowds and I think we can see what to expect at World Youth Day

I`m slowly trying to get together on this. it appears he is not very sympathetic to Summorum Pontificum. Even I would say there are plenty of other pressing issues in the Church but let`s hope for a change of heart on this one.

So God bless the Pope. I still find it unsettling that his predecessor is alive and well and who knows may even outlive Pope Francis. Or Pope Francis may also abdicate in a few years and we could have two popes emeriti! Strange times indeed.

Rather late with this having been somewhat distracted but there was some good news from Westminster diocese last week as two parishes have been asked to celebrate the Extraordniary Form each Sunday. It cheered me up a lot at the time. Here is the press release:

We are delighted to announce that there will be weekly Sunday Masses in the Extraordinary Form at two new venues in the Archdiocese of Westminster in the near future.

The Masses will take place in St Albans in the parish of St Bartholomew’s, 47 Vesta Avenue, St Albans, AL1 2PE, and in Willesden, north-west London, at the Shrine of Our Lady of Willesden, Nicoll Road, London NW10 9AX. In both cases, the parish priests have been asked by the archdiocese to learn and celebrate Mass in the Extraordinary Form.


Neither Fr Tim Edgar of St Albans nor Fr Stephen Willis of Willesden has previously celebrated the Extraordinary Form, but both are approaching the opportunity of offering the ancient form of Mass with a very positive and pastoral attitude. It will obviously take some time for them to reach the necessary level of proficiency to start offering Masses publicly. Nevertheless, training has begun and regular weekly Masses on Sundays will start later this year on dates and at times yet to be announced. Their parishioners have already been consulted and informed about the introduction of the Extraordinary Form in their parishes and the reaction has been positive.


This very good news follows meetings between the LMS and the archdiocese over a period of a year or more, in which LMS Chairman Dr Joseph Shaw, Local Representative for Hertfordshire Mike Mason, and LMS General Manager Mike Lord met with Bishop Alan Hopes and Bishop John Sherrington a number of times to discuss wider provision of the Extraordinary Form.

The LMS would like to thank Bishop Hopes, Bishop Sherrington and Archbishop Vincent Nichols for their work in helping to make the Traditional Mass available in these areas of the Archdiocese of Westminster.

LMS General Manager Mike Lord commented: ‘We are very pleased at this positive response from the archdiocese to what has been something of a pastoral crisis in Hertfordshire and north-west London in recent years for Catholics attached to the Extraordinary Form of Mass.

'It is doubly pleasing that the parish priest in each case has been asked to be the principal celebrant. The Traditional Mass needs to become a full and accepted part of parish life in dioceses across the country with an important role to play in drawing the faithful closer to Christ, especially in this Year of Faith. In the cases of St Albans and Willesden, the Extraordinary Form is set to do just that.’

Posted by Fr Michael Brown at 12:52 pm No comments:

Time to open the box! 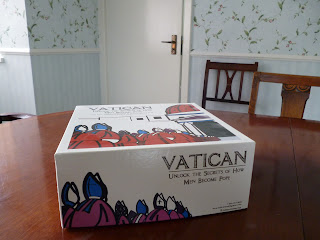 I still can`t get that worked up about who I would like to see as pope but from a Geordie perspective Odilo Scherer would be good (if pronounced as Shearer and it may not be). Or Cañizares Llovera if pronounced Canny Zares. He might also be the smallest pope ever if elected. Cardinal Ranjith used to say exciting things when at the CDW but hasn`t said much that has been picked up since going home. I don`t know: what we need is leader with a bit of charisma who can restore confidence in the Church. And a few saints would be a help.