This Saturday is the feast of the Douai Martyrs. There will be a High Mass at St Joseph`s, Gateshead at 12 noon. This feast has an added poignancy this year given the uncertainty over the future of Ushaw college, the northern successor of Douai. The celebrant will be Fr Simon Leworthy FSSP. The Mass has been organised by The Group Of Priests Of Hexham And Newcastle Who Meet For Lunch Once A Month Who Like The Extraordinary Form (aka TGOPOHANWMFLOAMWLTEF) and the local LMS.
Preceding the Mass there will be a morning of recollection for lay people given by Fr Leworthy. This will start at 10am and will include time for confessions. It is open to anyone who would like to come. Other parts of the country have days of recollection organised by the LMS but this is the first time we have attempted this in the North East. If you are coming you may like to bring a packed lunch for after the Mass. Many thanks to Fr Adrian Dixon, the parish priest of St Joseph`s for letting us use his church for this event.
St Joseph`s, Gateshead is very easy to reach by public transport: it is immediately opposite Gateshead Metro station.
Posted by Fr Michael Brown at 5:51 pm 19 comments:

Readers may like to know that there is a Facebook page asking for Ushaw to remain open. You can find it here.
Posted by Fr Michael Brown at 12:39 pm 2 comments:

What with the judicial vicars` trip to Rome from September 27th-October 1st , a period of seven days when I had five funerals as well as a lot of other things and then my long-planned trip to Compostela for the Holy Year ( together with three priests of the diocese) it has been hard to keep up. However there have been good things happening which you will have read of elsewhere. I would just like to mention a few.
Firstly I was delighted to hear about bishop Mark Davies and his declaration of a Year of Mary in the diocese of Shrewsbury. From what I`ve heard people are being asked to say five decades of the Rosary each day but I can`t find any verification of this. Another good thing was the Pope`s letter to seminarians. Such a simple idea yet not one I can recall happening when I was a seminarian. As a canon lawyer and having spent yesterday at the northern canon lawyers` meeting where we were addressed by the ever-entertaining and illuminating Fr David Jaeger of the Antonianum on the subject of recent legislation, I enjoyed this part of the letter:
But you should also learn to understand and – dare I say it – to love canon law, appreciating how necessary it is and valuing its practical applications: a society without law would be a society without rights. Law is the condition of love.
It reminded me of being told in the canon law aula at the Greg that `the law will set you free`! Some of our present difficulties have arisen through failure to follow the law.
Another thing which made me happy was the announcement that archbishops Burke and Ranjith would be made cardinals at the next consistory. When in Rome a few weeks ago one of our ports of call was, of course, the Apostolic Signatura where archbishop Burke spoke to us at length and made us welcome. (Another place we went was the Rota and it was the day before the dean, archbishop Stankewicz ( who had taught us Roman law at the Greg) was due to retire the next day as he was turning 75. He spoke to us with great warmth and at length and so the judicial vicars and their assistants sang `Happy birthday` stumbling a bit when we were unsure whether we should sing `dear archbishop Stankewicz` or `dear dean of the Roman Rota`!) Both archbishops Burke and Ranjith are great friends of the Extraordinary Form. 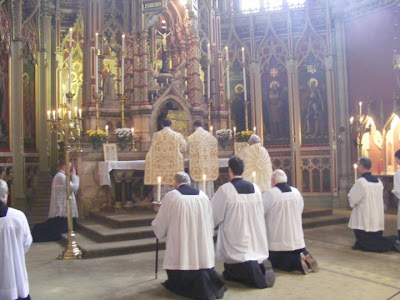 Another story in the news, as reported by Christopher Lamb in the Tablet last week , was the announcement that a traditionalist group led by LMS treasurer, Paul Waddington, are interested in buying Ushaw. What an incredible thought! It raises the question of who will staff it and who the students will be? The FSSP are the most obvious candidates but as they only have one very recently established house in England it would be a huge leap to go from there to running Ushaw but I suppose they had no houses when they opened the seminary at Wigratzbad in 1988. Clearly Mr Waddington has serious plans as he speaks of Ushaw being run as a `mixed commercial and religious development`. It`s all very exciting anyway. I was thrilled enough to be able to have the LMS training weeks at Ushaw and see St Cuthbert`s chapel used for the liturgy for which it was built but for that to be a permanent feature would be fabulous. It`s certainly a bold idea and one I will include in my prayers.
I hope to write about Compostela soon.
Posted by Fr Michael Brown at 10:10 am 5 comments:

I have been away to Santiago de Compostela and hope to write about that soon. In the meantime before I forget here are a couple of announcements of forthcoming events courtesy of the diocese of Westminster and the LMS.
Saturday 6 November at 2.00 pm
WESTMINSTER CATHEDRAL
Victoria St, London SW1
Pontifical High Mass of Requiem
followed by Absolutions at the Catafalque
Celebrant and Preacher: Rt Rev. John Arnold
Auxiliary Bishop in Westminster

What to do when your seminary closes?

Open it again!
(...but with a somewhat different ethos).

I had meant to give mention to the story of bishop Marc Aillet and his seminary when it appeared at the beginning of September but in the light of recent news up here it still seems worth mentioning it. The Eponymous Flower has provided a translation of the original story which was on the French Perepiscopus blog although the link given by the MessainLatino blog doesn`t seem to work any longer. (A German version is still available.)

The seminary in Bayonne closed ten years ago. At the time this was said to be, according to the out-going rector, a chance for the Church to break new ground. ( The usual stuff we can expect to hear again regarding Ushaw.) Last month the bishop opened his new seminary with eleven seminarians, another two in the pre-seminary year (see picture above) and an emphasis on the `hermeneutic of continuity` in the life of the seminary. Bishop Aillet is a great friend of the Extraordinary Form and has performed ordinations for the Institute of the Good Shepherd. The diocesan website has an account of the Mass for the opening of the seminary here.
Posted by Fr Michael Brown at 2:33 pm 15 comments:

Ushaw College to close in June 2011

I`ve just had an email with a press release announcing the closure of Ushaw college in 2011. I`m very sad to hear the news as it is a place of great importance in the history of the Catholic Church in England and especially the North East. It drove me mad at times when I was there but I find it hard to think that it will no longer exist. I wonder what will happen to the site?
A quotation from the press release:
In recent years, Ushaw College has developed to blend heritage with advancement while maintaining its core function of the formation of priests to help renew and continue the work of the Roman Catholic Church in the region. Currently, there are 26 seminarians in formation at St Cuthbert’s Seminary and once they have completed this year’s studies, it is proposed that they will transfer to another seminary.
Archbishop Patrick Kelly, Chair of Trustees said: “This is one of the most difficult proposals that we as Trustees have had to make, not least because of the excellence of the formation our students are receiving.”
Monsignor John Marsland, President of the College, expressed his sorrow at the proposal: “Ushaw has a long history within the Roman Catholic Church and words cannot express how sad we are that we are considering such a drastic step.
“We have long tried to find a development partner and it would be nice to believe that a partner will still come forward with a viable business plan but unfortunately time is running out and we have to face the reality of the situation we are in.”
Posted by Fr Michael Brown at 4:54 pm 20 comments:

I must write about last week`s trip (for canon law purposes) to Rome but I just wanted to make amention of the new programme of lectures organised by the NECHS which start this Wednesday with George Thornton speaking about `St Robert of Newminster and the early Cistercians` We begin at 2.15pm and meet at St Andrew`s, Worswick St, Newcastle. More details here.
Posted by Fr Michael Brown at 9:23 pm No comments:

Google Translate now offers Latin as one of its languages. However it is far from perfect as yet. Try for example `Quid pro quo` a common Latin phrase that it might be expected to deal with and you get `What happens in Vegas`! `Veni, vidi, vici` is a bit better but not all there in that it gives `I came, I saw the street of`. Strangely however entering Te igitur clementissime Pater per Iesum Christum Filium tuum Dominum nostrum, supplices rogamus ac petimus uti accepta habeas et benedicas haec dona, haec munera, haec sancta sacrificia illibata in primis quae tibi offerimus pro Ecclesia tua sancta catholica` results in a good translation. I`ll have to try the rest and see how it compares to the new translation.
It seems more successful in translating English into Latin although I`ve not tried very much.
Posted by Fr Michael Brown at 7:14 pm 12 comments: