It`s always difficult to comment on a story without knowing the full background but it is fact that a decree has gone out forbidding the Franciscan Friars of the Immaculate celebrating the Extraordinary Form either in public or private from  August 11th. Very worrying as this is in contravention of Summorum Pontificum. The founder Fr Manelli has been replaced as superior by a Capuchin too.

The FI are a thriving and young congregation. This is very depressing. Read about it here and here.Also Sandro Magister has an article entitled For the First Time Francis Contradicts Benedict. (H/t to Valle Adurni)
Posted by Fr Michael Brown at 1:24 pm 6 comments:

I was delighted to read today that the Oratorians are setting up a house at St Wilfrid`s in York. It`s a beautiful church although there was quite a controversy a number of years ago when the altar rails were removed. Having celebrated a Solemn Mass coram episcopo last year for the LMS pilgrimage and having been in choir for the hugely successful Missa Cantata in York Minster the year before there does appear to be a constituency for something more traditional in York and so I hope, Deo volente, it is a huge success. 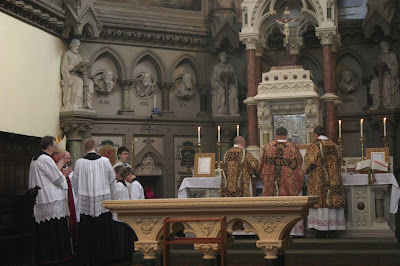 I was celebrant last year I think because I rejoice in the position of LMS chaplain for the north of England. I wasn`t needed this year and suspect that will continue to be the case once the Oratory arrive. Above is a picture of the sanctuary from the 2012 Mass.
Posted by Fr Michael Brown at 4:13 pm 10 comments:

There were rumours that Pope Francis was not favourable to the project of the Anglican ordinariate on the basis of a remark he is said to have made when archbishop of Buenos Aires. Bishop Venables, Anglican bishop of Argentina reported:

He [Bergoglio] called me to have breakfast with him one morning and told me very clearly that the Ordinariate was quite unnecessary and that the Church needs us as Anglicans.

Now the Pope has turned his attention to the Ordinariate and made a change in their constitution so that people who have been baptised as Catholics but not been confirmed or made their first Communion can become members of the Anglican ordinariate. I dont know what to make of this. If he ordinariate is about preserving the valuable parts of the Anglican patrimony in the life of the Catholic Church how is this served by incorporating lapsed Catholics? On the other hand it is good to see the ordinariate being affirmed in their role and being entrusted with this mission to the lapsed.

I suppose we just have to wait to see how it pans out. I understand from our ordinariate parish at Gainford, near Darlington, that a number of the `normal` parishioners attend the ordinariate Mass. I know I would if I were them. Now he has turned his attention to the Anglican ordinariate will it be long before Pope Francis turns his attention to the Ecclesia Dei societies and what surprises might he have up his sleeve?
Posted by Fr Michael Brown at 3:25 pm 11 comments:

Who needs `This little light of mine ` or `One step along the road` at school Masses when pre-school children can (almost) sing the Salve Regina?!