I have mentioned that the new altar missals will contain a rubric requested by the bishops of England and Wales which says that standing in a queue is the normal way here to receive Communion but that some individuals may wish to kneel and if people don`t kneel they should bow before receiving. We`ve not made much progress with the bowing but I have provided a prie dieu for the benefit of individuals who may wish to kneel. This has been placed by my side when distributing the host. So far at the Saturday vigil only one or two have availed themselves of the opportunity of using it but about five people use it at the Sunday Mass. Last week one of these people suggested it might be easier to use if I stood behind it. So we tried this today and I`m happy to say about another four people availed themselves of the prieu dieu.

At the parish council tonight I heard that there are others who would like to kneel but feel conspicuous using the prie dieu. The parish council is looking into ways to accommodate them and yes some of the commentators here will be pleased to hear we are going to look into some form of rail.

6. The Roman Missal promulgated by Pope Paul VI and the last edition prepared under Pope John XXIII, are two forms of the Roman Liturgy, defined respectively as ordinaria and extraordinaria: they are two usages of the one Roman Rite, one alongside the other. Both are the expression of the same lex orandi of the Church. On account of its venerable and ancient use, the forma extraordinaria is to be maintained with appropriate honour.

Thus if bishops and vocations directors are expressing any concern regarding the Extraordinary Form and seminarians it would, one would think, be to ensure that all seminarians are at home in both forms of the Roman Rite and most importantly are taught how to celebrate and to love the EF.

Sadly this is not what one hears. Instead seminarians are quizzed about their interest in the Extraordinary Form in such a way as to make clear to them that any interest would be considered a problem and as they used to say in my time, `a formation issue`. This is outrageous given developments in recent years. Eventually this will change but until then it is sad that people who are only following the directives of the Holy See are made to suffer.

28.08.11 UPDATE. I see that the reaction button can be pressed as often as you like. I thought each computer only got one vote. I suspect someone has a problem with Summorum Pontificum and is trying to cause trouble. If I could I would disable the reaction panel for this post but it can`t be done for individual posts as far as I can see. I also suspect supporters are registering multple votes as I`ve never had so many votes for any post before. If this continues I will remove the reaction panel altogether.

John Allen has an interesting piece on WYD and what he calls `Evangelical Catholicism`. It may be of interest to those who are puzzled by why younger Catholics and especially seminarians appear to be what they call `conservative`. He defines it thus

Evangelical Catholicism” is a term being used to capture the Catholic version of a 21st century politics of identity, reflecting the long-term historical transition in the West from Christianity as a culture-shaping majority to Christianity as a subculture, albeit a large and influential one. I define Evangelical Catholicism in terms of three pillars:

A strong defense of traditional Catholic identity, meaning attachment to classic markers of Catholic thought (doctrinal orthodoxy) and Catholic practice (liturgical tradition, devotional life, and authority).
Robust public proclamation of Catholic teaching, with the accent on Catholicism’s mission ad extra, transforming the culture in light of the Gospel, rather than ad intra, on internal church reform.
Faith seen as a matter of personal choice rather than cultural inheritance, which among other things implies that in a highly secular culture, Catholic identity can never be taken for granted. It always has to be proven, defended, and made manifest.

On the other hand I don`t see much evidence of the `Evangelical Catholicism` here among the young in Hexham and Newcastle. The older cultural model seems to be what we do. This was what I found dispiriting about the recent Come Home Sunday we had: the emphasis was on getting Catholics to come back to church simply because it was their cultural inheritance without emphasis on having to believe anything in particular. I remember we used to have an active Youth 2000 group but I`ve not heard much about them in recent years. I hope we do have some Evangelical Catholics among our young but this part of the world has not really been at the cutting edge of Catholic life since the death of Bede in 735.
Posted by Fr Michael Brown at 8:47 am 4 comments:

Thanks to Michael Voris for this report from World Youth Day.

Even the Guardian has noticed

I woke this morning to hear a story on the Today programme about a few thousand protestors complaining about the Pope`s visit to Spain. Nothing much was said about the 1.5 milllion young people who had turned up to welcome the Pope.

Andrew Brown on his Guardian blog has this to say:

If I were a Catholic, I would be feeling rather pissed off with the BBC. The news bulletin in this morning's Today programme carried a report of the pope's visit to Madrid that concentrated entirely on the "thousands" of protestors against the visit. It did not once mention World Youth Day, the extraordinary global Catholic gathering that the pope is also visiting. That has brought something like 1.5 million young people from around the world to the Spanish capital to greet him. Whether or not you approve of this, it is important and – above all – newsworthy simply because it is unexpected and goes against the grain of what the media tell us. So why is it not reported?

You can read the rest here.

UPDATE 19.08.11 Today has just had a feature on WYD again. It did mention `hundreds of thousands` of young people being there and interviewed pilgrims as well as the protestors.

The Coronation of the Virgin icons

The next stage of the icons for St Mary`s are nearly ready. Sr Petra Clare has sent me these pictures which show something of the work and stages of preparation. We were hoping that they would be here for the Feast of the Assumption. Sadly that didn`t happen but we are promised that they will be here for the end of the month. 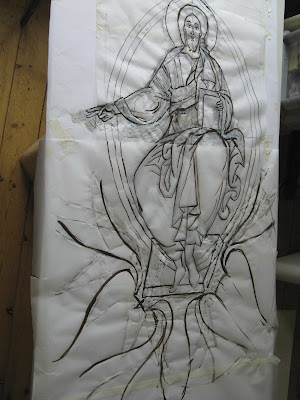 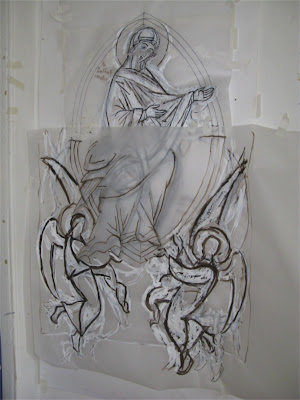 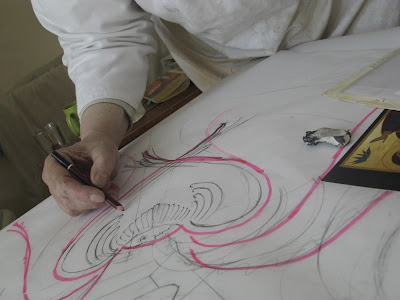 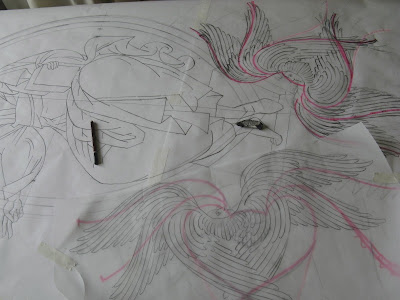 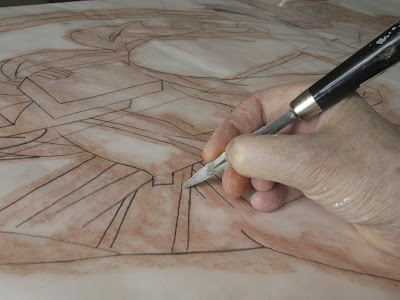 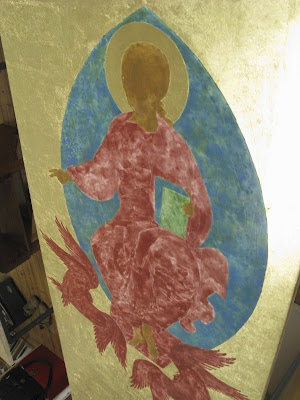 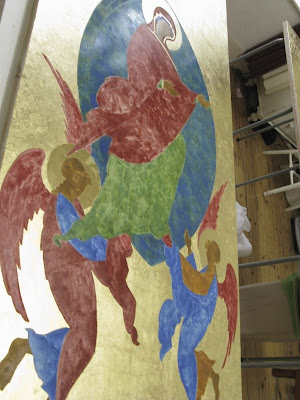 Two weeks ago I travelled down to London. (I`m so glad I didn`t go last week!) This time I was going there to join the celebrations for Fr Charles Briggs` Silver Jubilee of ordination. Seeing that Mac has written a report and even mentioned me I finally stirred myself out my lethargy and have crawled to the computer to write it up.

On Monday night I was glad to be able to meet up with our former schola director and also with Rubricarius for a meal. While Rubricarius and I disagree about a number of things we were able to agree on our favourite pope of recent times: Benedict XIV. (Although in my own case Benedict XVI is a serious rival for the title.)

On Tuesday I made the trip to Chislehurst for Fr Briggs Extraordinary Form celebration. As you will have read elsewhere, there were about twenty priests in choir (and a few others in the congregation) : the sermon was given by the former archbishop of Southwark, archbishop Kevin MacDonald. Fortunately as he is the archbishop emeritus the sacred ministers did not have the additional task of the extra ceremonies that arise when the ordinary is in choir. However Fr Finigan did remark in his speech afterwards at the Golf Club that they were celebrating High Mass before one of the more knowledgeable group of priests in the country and who would be able to spot the mistakes. Fr Finigan put it more succinctly than that

So it was good to see some familiar faces again: Fr Martin Edwards of Wandsworth, Fr Andrew Southwell of Clapham with Fr Basden. Also it was good to met Fr Ray Blake at last as well as Fr Nicholas Schofield who used to have the Roman Miscellany blog. It was a pleasure to meet Mac, the Mulier Fortis and Kathleen from Catholicism Pure and Simple. Here is Fr Finigan making his speech at the Golf Club after the Mass. 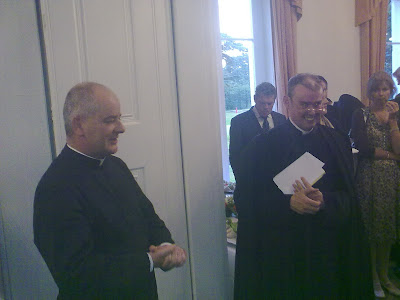 I did think more pictures would emerge of the Mass itself but only a few have surfaced so far.

The next day I went to see the altarpieces exhibition at the National Gallery which was very enjoyable. In fact I enjoyed it more than the relics exhibition at the British Museum which is not what I expected. Well worth seeing if you get the chance. My next post will be on the progress of our own altarpiece here at St Marys!
Posted by Fr Michael Brown at 11:04 am 5 comments:

A little late for the feast of the Transfiguration but I`ve just come across this tonight on the Vatican News website. I thought it was rather good and hope we hear more from Mgr Whitmore.

A friend pointed out this site to me today which seems fun. It is only available in German but with the help of Google Translate all will be revealed!
Posted by Fr Michael Brown at 3:45 pm 2 comments: