The Hexham Courant had a story on September 12th saying that following government cutbacks the North Pennines Heritage Trust has had to go into administration. As this is the body which looks after the upkeeep of Dilston Castle visitor centre, the centre had been forced to close.

However a letter from the Friends of Historic Dilston says that members of the Friend`s Commitee have been acting as volunteer custodians and will do so until the end of the season on September 30th. The volunteers still kept things going so that over 200 people were able to visit the site on the English Heritage Open Days (8-11 September).

The Friends` Committee is looking into ways of securing the future for the Dilston site. Let`s hope they find one so that this site of such importance for Catholic history in the North East can remain open.
Posted by Fr Michael Brown at 5:46 pm 5 comments:

Well we had the annual Brinkburn Mass on Saturday. This event has been going for sixteen years now. I was always intrigued by the large congregation we used to get on a regular basis. In the early years over a hundred people was the norm. More recently this has become about sixty but that was still a good number. Maybe it was the mixed weather forecast but for whatever reason we only drew a congregation of about twenty on Saturday In the past this was always a good family event but this time we saw no young people.
This can`t be put down to a lack of publicity because our LMS reps sent out posters far and wide and informed members of the date.

So while I ponder whether it is worth continuing with this Mass here are some pictures from this year thanks to Frank. 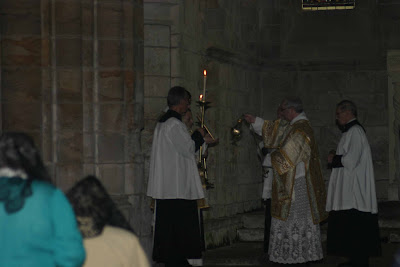 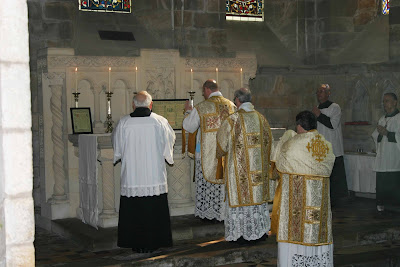 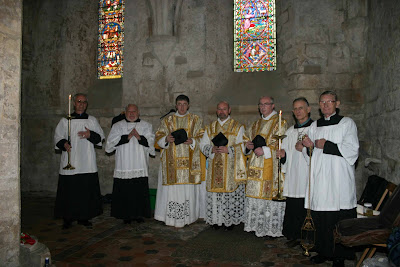 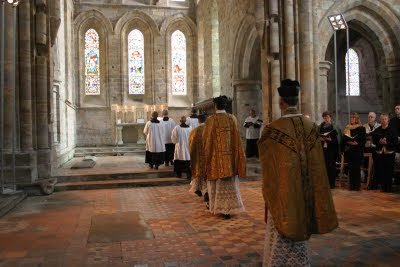 This Saturday at 12 noon the annual Extraordinary Form Mass will be held at Brinkburn Priory, in Northumberland with kind permission of English Heritage. The Rudgate Singers will be singing Hassler`s Mass no.2 and the schola Sancti Bedae will sing the proper. The celebrant will be Fr Swales, with Fr Phillips as deacon and me as subdeacon. The above picture is from 2009 when the sacred ministers were all members of the FSSP.
Posted by Fr Michael Brown at 8:49 am 4 comments:

This was forwarded to me today from Thursday`s Telegraph and I share it here. There are some interesting points.

Ambrose Griffiths, who died on June 14 aged 82, was Abbot of Ampleforth and later named the Roman Catholic bishop of Hexham and Newcastle.

The nomination so surprised him that the day after being interviewed for the post in 1992, he called Archbishop Worlock in Liverpool to check that the offer was not just a dream. The efficient archbishop, who had occasionally encountered vagueness among monks before, assured him that his memory was correct and the Pope did indeed want him to accept the appointment.

Some speculated that he owed his preferment in part to the fact that Worlock, Cardinal Basil Hume and Archbishop Couve de Murville of Birmingham were determined to prevent the post going to an Opus Dei priest or a conservative old Ushaw seminarian.

Griffiths arrived in his diocese like a gust of fresh air, aware that statistics suggested the diocese might not exist by 2038 if the rate of decline continued. He urged parishioners to be more friendly and non-judgmental with outsiders, and established a “youth village” near Consett from which volunteers would give missions in schools and parishes. In his playful way he liked to urge young people seeking suitable spouses to pray to the Archangel Raphael, the saint of happy meetings.

While remaining within the bounds of Church discipline, Griffiths wondered out loud whether the dwindling number of priests might eventually force a relaxation of the rule on clerical celibacy, and he apologised to divorcees for the Church’s failure to integrate them more into parish life.

Much loved, he encountered widespread grumbling only once, when he proposed that a piece of land in his grounds (which he regarded as an eyesore, though his neighbours claimed it was ancient woodland) should be sold to become a pub and restaurant. The project was dropped because the sum offered for it was too small.

: John Michael Martin Griffiths was born on December 4 1928 and went to Ampleforth before going up to Balliol, Oxford, where he obtained a First in Natural Sciences. He planned to become a research fellow in Chemistry, but changed direction when a chemist in the college had a mental breakdown and destroyed all Griffiths’s notes. Taking the name Ambrose on entering the Ampleforth novitiate, he was sent to the Benedictine house of Sant’ Anselmo in Rome to study Theology, then was summoned home after ordination although on course to win a double First.

For the next 14 years Griffiths taught science in the school, coping with occasional explosions in the laboratory and helping with woodwork. He rose to head of science and also taught dogmatic theology to novices.

As the procurator responsible for building the sports hall and new houses, his safe pair of hands made him a suitable choice to become abbot when Hume was appointed Archbishop of Westminster in 1976. But while Griffiths’s brethren appreciated his spiritual and practical qualities, not all shared his enthusiasm for charismatic prayer, and the pace of change which he set eventually led to his being refused a second term.

Although without pastoral experience he happily became parish priest of St Mary’s at Leyland in Lancashire. There was some concern that his lisp and Ampleforth accent might not be easily comprehensible, but he talked to everyone, always answered letters and threw himself into every aspect of parochial life from 6am to 11pm. He was so shaken at first by the poverty in the area that he declined to take a holiday in the Holy Land, when such a trip was clearly beyond the means of so many of his parishioners. Instead he delighted in doing anything to help locals, including shopping and washing up, though he was sometimes a little too keen for Lancastrian tastes.

Griffiths retired at 75. He then returned to Leyland as a curate.

May he rest in peace.
Posted by Fr Michael Brown at 1:02 pm 6 comments: