A Time for Contrition

I came across this article from the New York Times which seems more balanced than many I`ve seen. Just thought I`d mention it.
Posted by Fr Michael Brown at 11:40 am 14 comments:

I`ve been asked if I`m celebrating any Holy Week liturgies in the Extraordinary Form. Thanks to the chant group from Jarrow I`m glad to able to say that there will be a Good Friday Commemoration of the Lord`s Passion according to the 1962 books at St Mary`s, Forest Hall at 5pm on Good Friday. However there will be no sung Mass for Easter Sunday at Longbenton although it is the first Sunday of the month.
In previous years we have been able to celebrate Tenebrae but this year that will not happen. Most of the schola who were involved have moved away from Tyneside over the last few years and the reinforcements from north of the border are now in the happy position of being asked to sing Tenebrae in the cathedral in Edinburgh. Congratulations to Alan and the St Margaret Schola of Edinburgh (which has a blog here) : I hope all goes well.
A list of Holy Week liturgies in the Extraordinary Form taking place in England and Wales can be found here thanks to the LMS. It is good to see there is so much on offer.
Posted by Fr Michael Brown at 8:47 am 18 comments:

Thanks to Frank Erskine for sending these pictures of yesterday`s High Mass for the feast of St Cuthbert. There was a good turn out for the Mass and the it was good to have the choir of St George`s, Cullercoats, to sing for us. The choir enjoyed singing this music in the context for which it was written and we look forward to hearing them sing again at a future Mass. Fr Swales was the celebrant, I was the deacon and Fr Phillips, the parish priest, was the sub-deacon. Seasoned viewers of pictures from the world of the Extraordinary Form may recognise the MC: Leo Darroch, the president of Una Voce International. 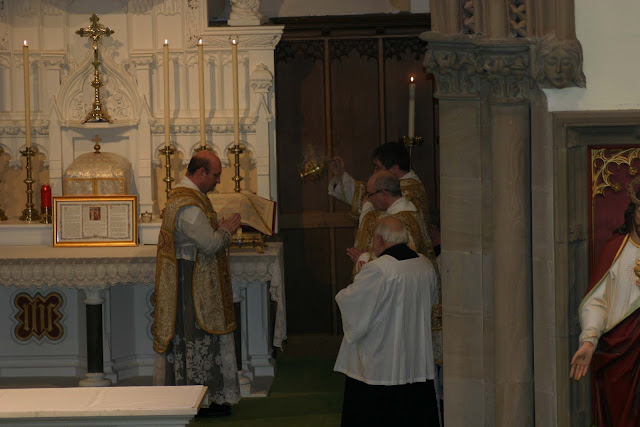 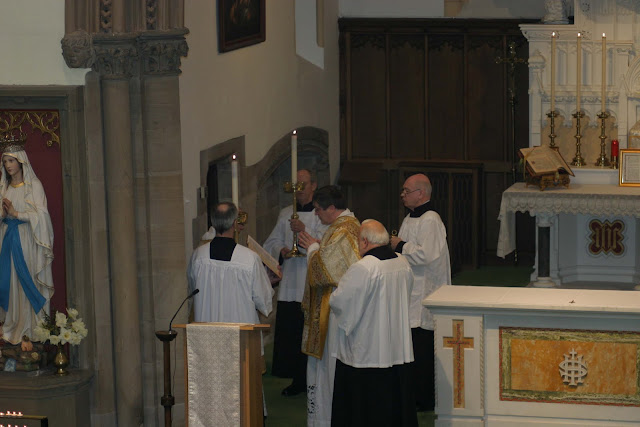 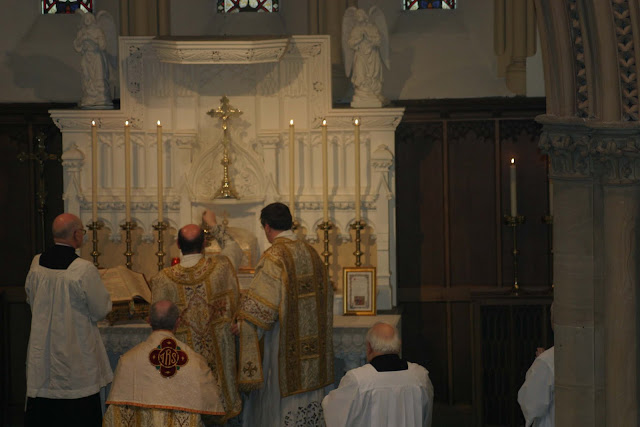 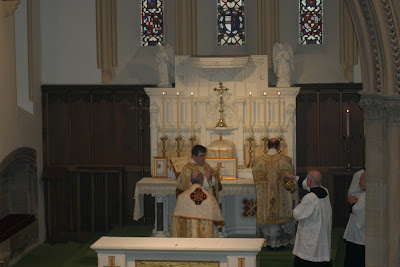 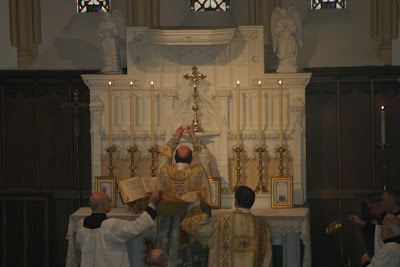 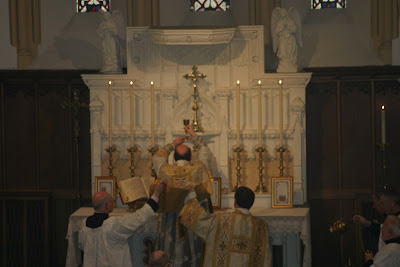 Just thought it may be of interest to readers to know that the new bishop of Gibraltar who was announced yesterday is a native of Sunderland.

The following appeared on the Vatican Information Service site yesterday regarding papal appointments:

Appointed Fr. Ralph Heskett C.Ss.R. delegate for vocations for the Redemptorist province of Great Britain.The bishop-elect was born in Sunderland, England in 1953 and ordained a priest in 1976. He succeeds Bishop Charles Caruana, whose resignation from the pastoral care of the same diocese the Holy Father accepted, upon having reached the age limit.
Posted by Fr Michael Brown at 10:47 am 1 comment:

Another story I`d been meaning to draw attention to I first saw in the Tablet but I also see gets good coverage in the Northern Cross. Readers will remeber the Intelligence Squared debate in London last year where the motion that `The Catholic Church is a force for good in the world` was overwhelmingly defeated. Then there was the more recent debate, hosted by the Spectator, on the motion that  `England should be a Catholic country again` where the motion was carried by Cardinal Murphy O`Connor, Piers Paul Reid and Dom Anthony Sutch. Now we have had a similar debate at Durham university on the motion `This house believes that Catholic morality has no place in the 21st century`. Speaking for the motion were Dr Julian Baggini, an atheist and editor of The Philosophy Magazine and one Thomas Ball. Speaking against were the university Catholic chaplain, Fr Tony Currer and Chris Lamb of the Tablet.  Fr Currer has written an account of the proceddings in this month`s Northern Cross  (p.6). He made the point that the bedrock of Catholic teaching is the innate dignity of the human person and that the biggest afront to human dignity is poverty, injustice and warfare. That seemed to do the trick as the motion was defeated. Congratulations to Fr Currer and Chris Lamb.
Posted by Fr Michael Brown at 10:43 am 3 comments:

I must have had Blogger`s Block or something but I have been meaning to get around to a few things and never have managed it. However just to say that Forest Murmurs this month reached the height of its fame in that it was quoted on the front page of the Northern Cross, our diocesan newspaper, in the lead story about the reception of Anglican bishop Paul Richardson, into the Catholic Church. Normally the front page of the NC is made available by the diocesan website, each month but this month that is not to be so I can`t let you see it. Apparently this is because Paul Richardson wants to keep his reception fairly quiet, even though I first saw the story in the Daily Telegraph! Does this mean the Northern Cross has a bigger circulation than the Telegraph?!
Anyway I`m grateful to the Northern Cross for a mention. The second last paragraph quotes me when I spoke about hearing the former bishop preach at St John`s in Killingworth. Maybe I should also mention that this month sees the new-look Northern Cross with full colour on every page. There is a website here with some very jaunty music.
Posted by Fr Michael Brown at 10:20 am 12 comments:

A group of priests of the diocese are arranging a High Mass in the Extraordinary Form at the church of  St Mary and St Thomas Aquinas at Stella, near Blaydon for St Cuthbert`s day ( March 20th). Mass will start at 12 noon and the music for the ordinary of the Mass will be Palestrina`s Aeterna Christi Munera setting which will be sung by the choir of St George`s, Cullercoats. This should be a splendid occasion and an opportunity to visit one of the most historic churches in the diocese for anyone who hasn`t been there before.

Here`s some information about the parish culled from `Down Your Aisles` by Michael Morris and Leo Gooch.

The earliest record of a Catholic presence at Stella is in 1149 when the bishop of Durham granted the manor of Stella to the Benedictine nuns of Newcastle as a summer retreat and a source of income. Stella Hall was created after the dissolution of the monasteries but was built by a Catholic, Nicholas Tempest. In 1598, the bishop of Durham writing about Catholic activity in his diocese wrote `Nicholas Tempest of Stella, that great recusant... where at Stella, if I am rightly informed, they keep up a Popish spiritual service`.

A priest was in residence at the hall throughout the penal period with Benedictines and Jesuits serving as chaplains. An interesting point to note is that the name of the tune for `Hail Queen of Heaven` is Stella because it was composed there.

The church opened on October 12th 1831 and was designed to seat 300. A three part Mass ( by Webbes) was sung with full orchestral accompaniment, preceded by the overture to the Messiah and terminated by the Hallelujah Chorus! The church is notable for the design of the presbytery which is added as a kind of facade to the church so that from the road it looks like a castle more than anything, presumably so as not to alarm any passing Protestants. Stella Hall itself was demolished in 1954. Four daughter parishes have been founded from Stella.
Posted by Fr Michael Brown at 12:44 pm 13 comments: