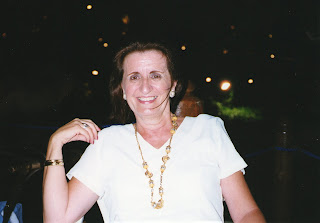 I`m very sorry to say that my mother died suddenly of a heart attack in her sleep on Tuesday morning. She had celebrated her 75th birthday this month. Many thanks to all who have sent condolences. She was a truly wonderful mother and I will miss her very much. Her Requiem is on Monday in our home parish of St Peter`s, Low Fell, Gateshead at 10am. May she rest in peace.
Posted by Fr Michael Brown at 5:37 pm 25 comments:

Nice to have the bees back in the Exsultet.

The new translation continues to surprise.

Reception of St James` Anglican parish, Darlington, into the Ordinariate.

Tomorrow night at St Anne`s Catholic church in Darlington at 7pm sixty or so parishioners and their vicar will be received into the Catholic Church and the Ordinariate. This promises to be a wonderful event and I am intending to be there to see it.

UPDATE: 5.04.2012. Just to say I did get down to Darlington and it was a wonderful occasion. Musically it was more subdued than usual as it was Wednesday of Holy Week so we had Mass with hymns but the hymns were sung with tremendous gusto and at Communion soloists sang three items by Handel ( start of the Salve Regina; `He was despised` from the Messiah and `Soll mein Kind, mein Leben sterben` from the Brockes Passion`). Mgr Keith Newton was the main celebrant. At the end of Mass he gave a useful guide to what it means to be a Catholic in the Ordinariate and how it doesn`t mean they are not `proper` Catholics. Explanations of this kind  are useful as there is still a ot of misunderstanding about the whole thing I find. He also spoke of how the moving force for the Ordinariate is the search for Christian unity. The bishop of Durham had been hoping to come but sady could not make it. A number of St James` parishioners who are not joining the ordinariate were in the congregation as well as some Anglican clergy. It was good to meet deacon James Bradley, the Ordinariate communications officer at the reception afterwards. 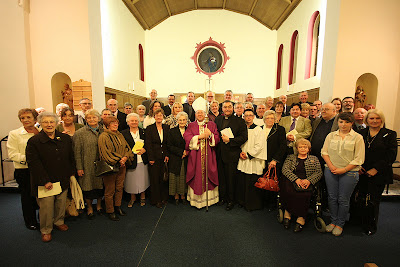