Apologies for the lack of posting here in the last few weeks. I hope things will pick up again soon. Just a quick note to say that Mass times for All Saints are as follows: at St Mary`s, Forest Hall, 11am and 7pm and at SS Peter and Paul`s, Longbenton, 9.30am and 7pm (Extraordinary Form, Low Mass)
Posted by Fr Michael Brown at 7:08 pm No comments:

Sermon from the Golden Jubilee Mass

I`ve never posted a sermon on the blog before but here is what I said at the jubilee Mass on October 4th: the Feast of St Francis with the readings of the day.

In tonight`s first reading we come across Jonah. God is offering a new start for the people of Nineveh. Jonah was afraid: he didn`t want to go. However eventually he got there, preached and it worked. I always take comfort from that as a preacher: that God`s word does its work. Jonah was indignant about it and God taught him a lesson with the castor-oil plant which grows and then withers. God wants to show that even the well-being of the non-Israelites of Nineveh is crucial to Him. What he wants is for them to know him and the new start he offers.

A new start is what St Francis brought. What do we think of when we think of him? Maybe we have been to Assisi and seen the places he lived. Maybe we`ve seen the film, Brother Sun and Sister Moon and get our ideas from there. Francis acceptance of the Gospel was so captivating he showed his world a new way to live which immediately spoke to the people of his day and continues to inspire men and women to follow his way to Christ. He enjoyed freedom, the freedom that comes in living only for God. He spoke of beauty and love of communion with all creation as we`ll sing at the offertory hymn: a freedom from material obsession in the journey to God. And a radical and joyful way of life. A man who didn`t set out to start a movement, let alone one which would change the society of his day and even change western art as he preached about the real humanity of Christ and that was taken up by artists such as Giotto.

Francis` conversion was first tested when he reached out to kiss a leper and give him money. But he first got an idea of his mission when praying in the dilapidated church of San Damiano. Lying prostrate in front of the crucifix ( which you can still see in Assisi today) he heard a voice coming from the cross, telling him three times `Francis, go and repair my house, which as you see, is falling completely into ruin`. So he sold his horse and some of his father`s cloth and presented the money to the parish priest for repairs. The parish priest wouldn`t take the money because he knew it came from sale of father`s cloth. Eventually set too repairing the church begging for the materials. Once he`d finished San Damiano he started repairing the nearby church of St Peter.

It was St Francis and the repairing of churches which led to him gaining papal approval for the friars. Pope Innocent III, one of the most prestigious of popes, had a vision of the Lateran basilica, the cathedral of Rome, appearing to fall down. However in the dream the church was saved by the little poor man from Assisi who he saw holding up the structure. A guide in Assisi one time when I was there was drew our attention to the way St Francis was painted holding up the church from the inside. He saw this as important as there were this in Francis time who claimed to want to save the church but were doing it from the outside. Francis always worked from the inside because of his love of the Church. He urged people not to abandon their parishes because their priests were not up to par, because they still administered Christ`s sacraments.

So we are celebrating tonight 50 years of this church building of St Mary of the Rosary. An unusual dedication but I like it. Many churches dedicated to Our Lady of the Rosary but St Mary is an older dedication and not sure how the parish got it but I`m very happy with it.

Many of you will remember the church as it opened in 1961. We have pictures to help you in the display in the hall if you don`t known what it was like then. I think it`s fair to say St Mary`s has never been considered an architectural masterpiece but it has served its purpose well as the heart of the parish. I`m told it was known as `the Hangar because… well it looked like a hangar! Ideas styles and fashions in church architecture change. Ideas in terms of what a church should be that dominated the large part of the 20th century are coming up for review.

The note of a church should be, not that of novelty, but of eternity. Like the Liturgy celebrated within it, the measure of its greatness will be the measure in which it succeeds in eliminating time and producing the atmosphere of heavenly worship. This is the characteristic of the earliest art of the Church, in liturgy, in architecture and in plastic decoration, and it is the tradition of all subsequent ages.

The Church is made of the living stones of the people of God. The church building has traditionally been cared for by its community and made beautiful. Great ascetics such as the Cure of Ars have lavished attention on making the church building beautiful. Why? The trend in recent decades has been towards utility and a distrust of beauty: the building only as a meeting place for the People of God but the beauty of the church and the sense of the sacred that it should engender is meant to help us in our quest to seek holiness of life. It is a place where like Mary in the Gospel we should stop worrying and fretting over so many things like Martha and instead concentrate on meeting Christ who takes all our worries and cares and offers them to the Father in his perfect sacrifice offered on the altar

So tonight we give thanks to God for 50 years of worship in this building. In the bidding prayers we will remember all those who have worshipped here and celebrated key events in their lives here. We pray for God`s blessing on this parish over the next 50 years and that it will be a place where we may always find a new start, like the people of Nineveh and be fired with love of God like St Francis, a love that is stronger than death, a love which brings new life and opens the gates to eternity. 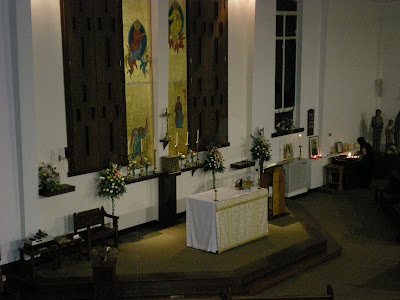 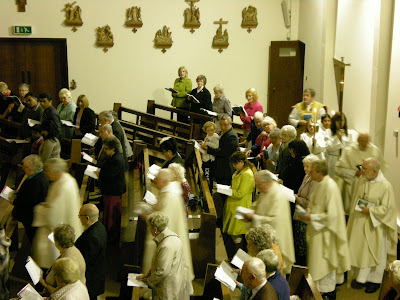 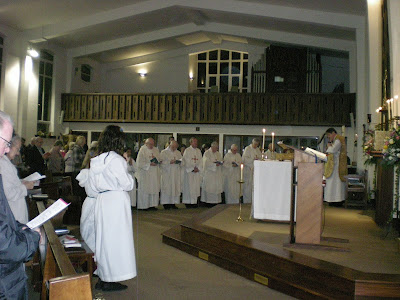 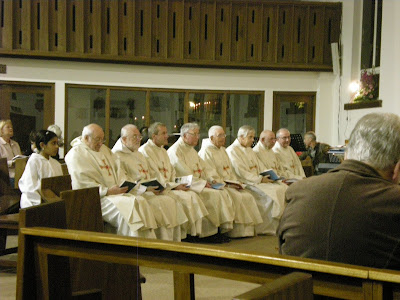 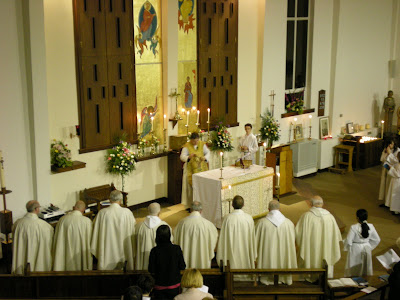 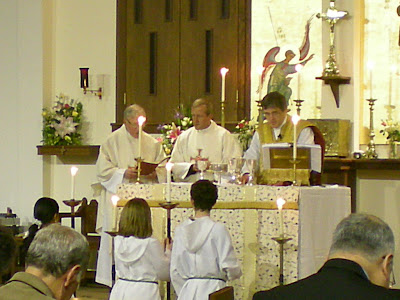 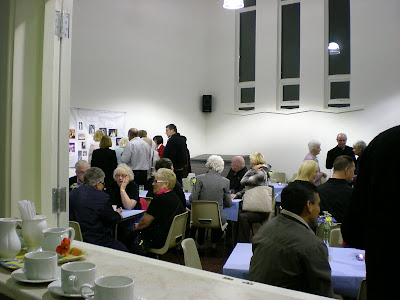 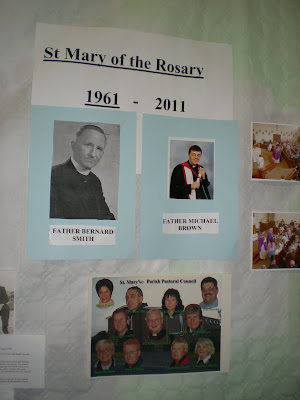 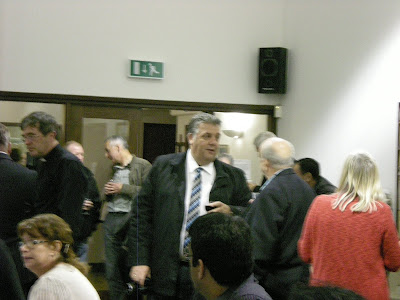 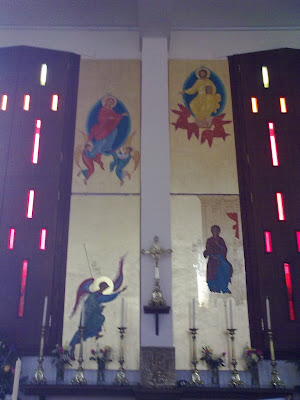 This is a very busy week here in St Mary`s as we prepare this week to celebrate the Golden Jubilee of the opening of the church. We have a Mass tonight with clergy who have served in the parish, clergy ordained from the parish and clergy from the deanery. On Friday night the bishop will come to confirm twenty young people from this parish and from SS Peter and Paul`s, Longbenton and on Saturday night we round off the celebrations with a Ceilidh in the Forest Hall club.

I`m delighted to say that the new icons arrived from Sr Petra Clare on Friday and today our joiner Davy and his son, using some ingenuity, managed to get them in position for tonight`s Mass. So now we have the first and last mysteries of the Rosary depicted behind the altar.

Work has been going on the last two days with a small and dedicated group of parishioners preparing the hall for the buffet and a display of photographs from the last fifty years. Our music group were still rehearsing at 10pm last night too.

So let`s hope all goes well. I`ve spent yesterday producing a booklet and this morning putting a homily together. Everything is ready now so I`m going for a rest.