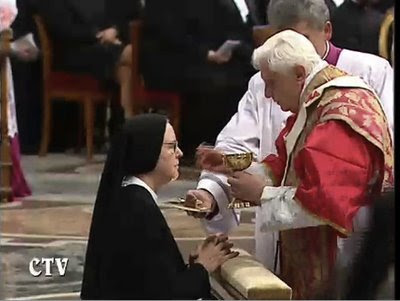 Readers will have seen elsewhere that there have been some difficulties over the rubrics printed on the CTS Mass cards for the new translation. The main concern is regarding the rubric for the reception of Holy Communion by the laity. Another priest has told me he is unhappy because the CTS card indicates that the sign of peace is always to be included and the offertory prayers are to be always said aloud (unless there is singing of course). I like the CTS and think they are doing a great job and hope these difficulties are sorted out.

Fr Finigan mentions the Redemptorist and McCrimmon cards don`t have these problems. I ordered the McCrimmon cards when they first came out precisely because they fairly rubric free. In fact it only has two. One is an instruction to bow during the Creed during the Et incarnatus est and the other is at the end where it usefully says `Then the deacon, or the Priest himself, with hands joined and facing the people says` and the dismissal follows. ( It is strange that priest is gets a capital `P` and deacon is in lower case.) I always enjoy reminding people of the rubrics in the OF Mass which instruct the priest to face the people. I wonder what people make of them who cannot conceive that an ad orientem Mass would be intended? In such a case what else would the priest be doing but facing the people? Do they think it is there because there is a danger that the celebrant might be tempted all of a sudden to face the back of the sanctuary for the dismissal after facing the people for the rest of the Mass?!

We gave the new translation a go on Tuesday morning at St Mary`s. I intend using it on Tuesdays of July and then all the weekdays of August to get at least a core of parishioners familiar with the responses. In fact the reaction I got was could we have it twice a week to increase familiarity? I struggled greatly with the paperback interim missal which won`t lie open of course and so kept closing on me during the Mass. That will need sorting out.
Give that this is a time of change for the whole Catholic Church in this country what with the translation and the re-introduction of abstinence on Fridays I intend doing something more about ad orientem. A week past Sunday we had the First Holy Communion Mass at Ss Peter and Paul`s, Longbenton. As the children are now used to school Masses being ad orientem I weighed up the options. It may confuse the children to celebrate facing the people after having carfeully explained the advantages of ad orientem a while ago. On the other hand the parish aren`t used to it as yet and can get angry at this as they feel `excluded`. However the church was packed with the families of the communicandi many of whom had probably not been to Mass for a long time so I decided to stick to ad orientem for the offertory up to the distribution of Holy Communion. No-one made any comments and no-one appeared to be angry but I hope to talk about it this Sunday which will be the first time I`ve said the Sunday Mass in Longbenton since the First Holy Communion Mass. (At St Mary`s, Forest Hall the children are not used to regular school Masses but that will change in the new school year from September.)

Another change to which attention will have to be drawn is the new instruction for the laity`s reception of Holy Communion. For anyone who is not aware the English bishops have had an instruction included in or missals which will read:

"In the Dioceses of England and Wales Holy Communion is to be received standing, though individual members of the faithful may choose to receive Communion while kneeling. However, when they communicate standing, it is recommended that the faithful bow in reverence before receiving the sacrament."

We`ll have to look into bowing so as to be faithful to the recommendation and even it seems provide a prie dieu or something like that for those individuals who may choose to kneel as the instruction says.
Posted by Fr Michael Brown at 7:38 pm

"We`ll have to look into bowing so as to be faithful to the recommendation and even it seems provide a prie dieu or something like that for those individuals who may choose to kneel as the instruction says."

this instruction to bow is the the last thing that has tipped me towards being able to kneel to receive communion at NO masses. I have wanted to for quite a while but have been put off by the idea that I will 'hold up' the queue unduly. However reading this new instruction that if standing the person should make a bow shows me that however we receive it will now 'hold up' the queue and so I feel able to kneel.

Provision of a prie dieu would be a wonderful gift. I'm not holding out hope in my own parish. If you provide one Fr Brown it will be a wonderful service to your congregation.

Does this the question of standing for Holy Communion take precedence of the Pope's Instruction for the EF of Mass? We still have 1 lady who insists (via her daughter who doesn't receive Communion)that it is her "right" to receive in the hand even at EF Masses

You mention the provision of a prie dieu for those who wish to receive kneeling. As someone with a "dodgy" left knee, I am unable to stand after kneeling, and need something to hang on to. In most parishes it is virtually impossible for communicants to receive kneeling since altar rails were abolished.

A prie dieu would be (literally) a God Send for the dodgy knee/hip brigade.

The latest 'difficulties' surrounding the rubrics of the CTS cards concerning the reception of holy Communion are merely the continuation of the shambles of the past 40 years. It is without doubt that the rubrics for the 'old' form were clear cut - as rubrics should be - and that everyone conformed because of that clarity of purpose.

The rubrics for the new form of Mass have always been a cause for interpretation/choice/disagreement because of the chaotic way in which they were framed and presented. The best way to promote a shambles is to give a room full of people who are attending the same function, the choice of how to behave at certain key moments. The show-offs will take centre stage: the meek and mild will stand at the back and see how things develop, and the barrack-room lawyers will criticise everybody for not doing it right.
This never happened pre-1970 when everything was done with decorum and uniformity. And everyone accepted it.

I, for one, will never stand in a queue and genuflect or bow my head when I reach the front because, despite the instructions from our bishops, it looks as if I am showing honour to the extraordinary minister of holy Communion. Actually, I would never even consider receiving Communion from any layperson but you will get my drift.

Why don't the bishops swallow their 1960s pride and restore the altar rails. Then we could arrange ourselves along the rails as we pleased and this would satisfy everyone as we could kneel, stand, receive in the hand or on the tongue, to our hearts content. Or is this solution too simple in these days of deliberately orchestrated chaos.

The 2 articles in 'Catholic Herald' this week (1 by Archbishop Nichols & 1 by Fr Tim Finigan) have left me in a quandry - not for myself but for others. The archbishop speculates that both standing & receiving in the hand are on a par with kneeling & reception on the tongue & then goes on to describe kneeling as giving more honour to God.
See my blog www.dumplingdavid.blogspot.com for my deeper thoughts.
I describe it as "a dichotomy"

We have the New translation on weekdays..I very much like it!Would you mind updating to my new blog Fr?

Mea maxima culpa!! The fact that I am (almost) computer illiterate led me to suggesting you look at my personal blog. Fr Brown kindly pointed out that it is www.dumplingboy.blogspot.com & not as I previously & erroneously quoted it.
Still looking for answers to my confusion re Holy Communion

I think you should compromise and face sideways! One week to the north and one week to the south. If they say you are making nonsense of orientation, then tell them so are they!

"I struggled greatly with the paperback interim missal which won`t lie open of course and so kept closing on me during the Mass. That will need sorting out."

The priest I'm staying with thought ahead. He photo copied the appropriate sections and placed them in a dignified folder, purchasable from any good stationary shop.

Thanks Anonymous. this week the missal was more co-operative and the will probably settle down but thanks for the useful idea.