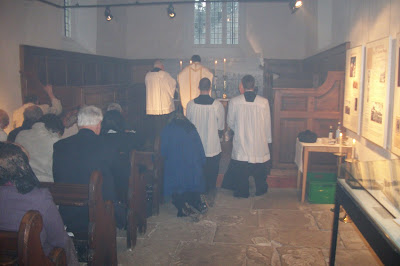 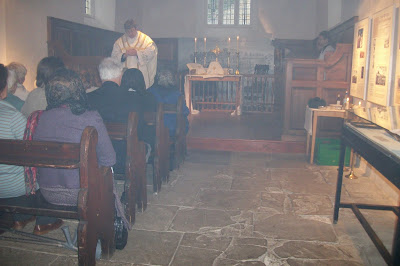 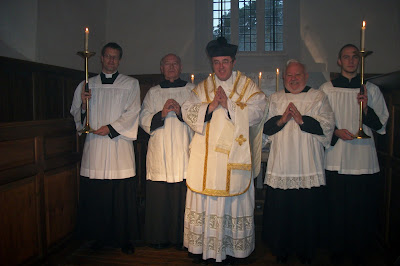 Thanks to 1569 Rising for these pictures from Dilston. The chapel was packed to standing-room only (i.e there were about thirty in the congregation). Fra Matthew Festing was there and among the servers was James Mawdsley, who is returning to Wigratzbad in September for his third year at the FSSP seminary and Leo Darroch, president of Una Voce International. I was chatting afterwards with a gentleman who told me he had unearthed a letter which showed that James Radcliffe, the third Earl, executed after the 1715 Jacobite rebellion, was undoubtedly executed for his faith and not his politics and so should be on the road to beatification if anyone were to take up the cause.

Next year the feast of St Mary Magdalene (to whom the chapel is dedicated) will be on a Sunday so Mass will be on Monday 23rd.
Posted by Fr Michael Brown at 11:20 am

It looks as though it was a wonderful event. I'm only sorry i was not able to attend.
are the benches extremelty close...there is a lady kneeling directly behind one of the servers?

It may be. There`s certainlly not a lot of room.

Actually Father Gary this is, I'm sure, the only time since the first Mass there that we have had a full altar team. When it was decided to use Andrew & James as acolytes I thought (as I'd previously said) have to eject half of the congregation. In the event we coped very well as long as the servers & Father timed their moves correctly!

Father Michael,
Is James not starting his third year at Wigratzbad in September?

I did originally say he was starting his third year but then thought about it again but now having checked find he started in September 2009 so this is the third year. I`ll change it back.

I did originally say he was starting his third year but then thought about it again but now having checked find he started in September 2009 so this is the third year. I`ll change it back.