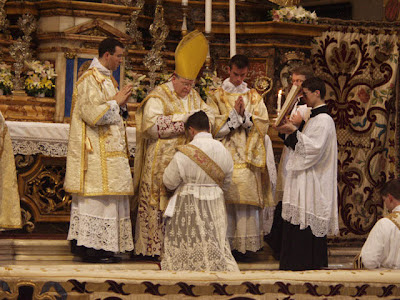 Rocco Palmo on Whispers in the Loggia has an interesting piece today about archbishop Burke, the former archbishop of St Louis who has been appointed to be head of the Apostolic Signatura. I have heard some eminent canonists express the opinion that Summorum Pontificum is somewhat deficient canonically. Now it is revealed that Archbishop Burke was one of the people who worked on it and a more eminent canonist it would be hard to find. (However I`d still like to hear spelled out how the missal of John XXIII was never abrogated. It`s only of academic interest now but it would be nice to know. I`ve always believed it was obrogated ( i.e. a new law was passed, Missale Romanum, which in re-ordering the subject matter of previous legislation, effectively replaced it and Paul VI certainly said in a couple of allocutions that the new was now compulsory).

Rocco mentions the good archbishop`s recent ordination of priests for the Institute of Christ the King and suggests that he might be in the running to take over the Ecclesia Dei commission as its present head, Cardinal Castrillon Hoyos, while working hard, is 79 years old and could be looking forward to retirement at 80.
Posted by Fr Michael Brown at 11:29 pm

This is a most interesting point which Father raises. I wish I knew some Canon Law !

Paul VI never declared in so many words that the "old" Mass was abrogated, did he ? Oh yes, he spoke and acted as though it had been, but that's not quite the same thing.

In promulgating the 1970 Missale Romanum, Paul VI may have thought (and obviously did think) he was abrogating the old Missal. Clearly, a new edition replaces an earlier edition. But this was not a new edition. It was a completely new construct. Admittedly, it made use of some material from the old building, so to speak, but it was a fabricated product. It had not evolved organically.

Incidentally, the so called Mass of St. Pius V was not a new construct. It was merely a re-working of the old.

As I understand it, the novus ordo was (and is) a derogation from, not an abrogation of, the bull "Quo Primum" (1570). I must say if this was the thinking behind "Summorum Pontificum" I would like to have seen it spelled out.

I have been told that the "old" Mass existed by immemorial custom, (I'm not at all sure this argument holds water,) and also that "Quo Primum" could never be revoked (I can't argue with that : I don't know !) and, in fact, never was revoked. But there are, I think, many opinions to the contrary. Tot homines, quot sententiae.

This also raises the somewhat academic question : If the old Mass was never abrogated, then what was the purpose of the Indult ? You don't need permission for something which is not forbidden. (This is not an irrelevance : one still encounters the old Indult mentality.)

Was, therefore, proscription of the old Mass an aberration, an illegality, or what ? I somehow doubt we shall ever hear a satisfactory explanation !