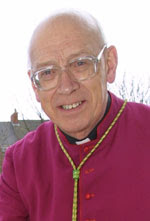 I have been away for a few days. When I got back I found quite a lot had been going on. I was sad to hear yesterday about the death of bishop Ambrose Griffiths, bishop of Hexham and Newcastle from 1992 until 2004.

It was in 1992 shortly after his appointment that bishop Ambrose gave permission for a weekly Sunday Mass according to the 1962 missal at St Dominic`s Newcastle. Although this was four years after Ecclesia Dei it was still relatively rare in England to have a Sunday Mass in the same church every week. Other bishops allowed Masses every Sunday but often had them take place in a rota of churches ( as in Lancaster). Bishop Ambrose was a true liberal and although he had no interest in the Extraordinary Form itself he was willing to let other people attend it convinced that it was sought after only by a few nostalgics and that in time it would die out.

In about 1993 I asked the bishop for permission to celebrate the 1962 Mass at St Robert`s Morpeth where I was the curate. He gave permission and that monthly Mass continues to this day on a weekday. When I became a parish priest in 1995 I asked for permission to celebrate a 1962 Mass on a Sunday and once again permission was given even though this Mass was just over the river from St Dominic`s, at St Wilfrid`s Gateshead. So I was able to continue with a Sunday Mass until I was moved from Gateshead in 2005. When I was made parish priest of St Joseph`s, Gateshead in 2002 or so I moved the Sunday Mass to that church, the mother church of the town and it continues to this day and is now said by the parish priest. Fr Elkin was also gven permission for Mass at Ryhope.

We had an interesting time when bishop Ambrose came on visitation to St Wilfrid`s. I had thought to have a Missa Cantata to make it more user-friendly from a Novus Ordo perspective. However this didn`t materialise and so we had our normal non-dialogue Low Mass. Bishop Ambrose preached and all I remember about the sermon was that he told us that the Pharisees were the canon-lawyers of their day ( I was tempted to reply that the High Priest was the bishop of his day) and that he had a lot to say about Luther for some reason and how the Catholic Church and the Lutherans had sorted it all out now. HIs remarks made it into Christian Order magazine! However after Mass bishop Ambrose said he couldn`t understand why anyone would want to go to a Mass like that. He said he had loved it and celebrated it when young but had moved on. (I have felt the same about the Chrism Mass!) Nonetheless despite his own feelings he was happy for others to benefit from the then so-called Indult Mass. In this he was considerably more enlightened than some of his brother bishops then and even now.

May he rest in peace.

Bishop Ambrose`s Requiem will take place on Ist July at St Mary`s cathedral at 12 noon and is open to everyone. He will be buried at Ampleforth Abbey the following day.
Posted by Fr Michael Brown at 5:20 pm

May he rest in peace. He once told me that he tried to get the matter of Catholic Hymns onto Bishops Conference agenda, but the secretariat would not allow him! He wanted us to stop singing heretical hymns which we had become accustomed to doing without thought.

I met Bishop Ambrose shortly after coming up to to the North East, and found him a caring and inspiring shepherd. RIP. Please also remember Fr. Deegan of Hexham who also died this week after over 30yrs in the parish.

Bishop Ambrose, or 'Father' as he liked to be called, was truly a loving pastor with me, showing himself to deserve the title 'Father'. We did not always agree and yet, when discssing things with him, there was never anything other than respect shown for me. I had the opporunity to make a very brief visit to him before his death, on which occassion I was able to tell him that for me, he was always a Father more than a Bishop. May he rest in peace.

Father Ambrose was the most likable Priest I have ever encountered in my life. He treat everyone around him with the most upright respect, no matter who they were. He was a kind thoughtful friend above all, one I am very happy to have known.God Bless him.

EFpastor emeritus wrote, re Bishop Ambrose: 'He once told me that he tried to get the matter of Catholic Hymns onto Bishops Conference agenda, but the secretariat would not allow him!' How could that happen? Information just received by me is: 'The General Secretariat is an administrative office of the Bishops’ Conference and so has a number of staff. The General Secretary is Fr Marcus Stock. It does not have members, unlike the Bishops’ Conference itself whose members are the bishops. ' In the light of EF pastor's revelation I find it disturbing that the bishops appear to have to do what they are told to do by laymen and/or an ordinary priest - or told what they cannot do! Surely time now for bishops to become responsible again.