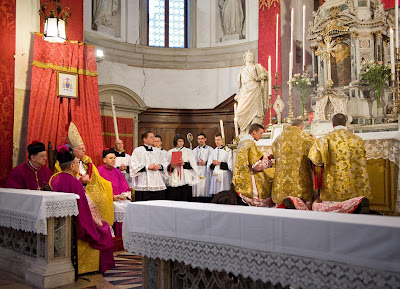 I`m always somewhat surprised when an archbishop is transfered to another archbishopric. It just seems odd to me. Maybe I`ve not been paying sufficient attention and it is perfectly normal. We had archbishop Peter Smith move from Cardiff to Southwark recently. Today I read that Cardinal Scola, the Patriarch (no less) of Venice has become the new archbishop of Milan. I only mention this because the incumbent Scola is succeeding, Tettamanzi, has apparently not been very sympathetic to Summorum Pontificum and MiL sees this move as cause for hope for the Catholics of Milan attached to the ancient form of the Ambrosian Rite. The above picture from Venice helps confirm this.

The other Patriarch making the news is that of Lisbon who appears not to have understood Bl John Paul`s document on the reservation of priestly ordination to men, Ordinatio Sacerdotalis. However he is 75 so will be retiring soon.

UPDATE 08.07.11 The Patriarch of Lisbon has issued a clarification and expressed his allegience to the Magisterium!
Posted by Fr Michael Brown at 10:59 am