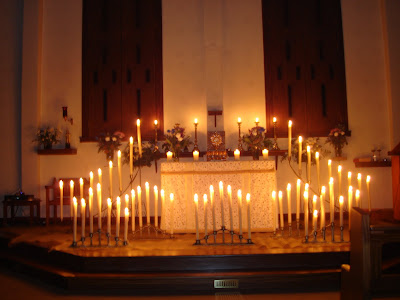 Earlier than in previous years, the Forty Hours devotion will take place at St Mary`s starting this Sunday night at 6pm. I moved it to June to make more use of the warmth and light but it has worked out well as Cardinal Piacenza, Prefect of the Congregation for Clergy, has asked every parish, or religious community to offer sixty hours of Eucharistic Adoration during the month of June, to celebrate the Sixtieth anniversary of the priestly ordination of our Holy Father Pope Benedict XVI which is to be celebrated on 29th June and also for the sanctification of Clergy. Cardinal Piacenza says “in this way, the Pontiff could be honoured with an extraordinary spiritual bouquet of prayer and spiritual union"

We may not reach sixty hours of Exposition this month but we will come fairly close. There will be watching through most of the night on Sunday (only two hours are as yet not spoken for) and on Monday night we will have to stop at 1am and resume at 6am. If you are in the vicinity you are most welcome to join us for this very special time in the life of the parish.

PS. For anyone worried that the Annunciation icon has disappeared this is an old photo from before it came.

UPDATE: 20.6.11 I`m glad to say that the whole of last night was in the end covered and the same will happen tonight so we will cover all forty hours!
Posted by Fr Michael Brown at 3:12 pm

At Ryhope we are in our 33rd year of 40 hrs Devotions, which starts next weekend and sadly only one name on the list as of tonight!

Please say a prayer we can continue this wonderful traditions

A beautiful peaceful time to spend with the Blessed Sacrament in St Mary's these last 40 hours. Looking forward to the next time.