A day out with the North East Catholic History Society

On Saturday I finally managed (after years of trying and failing because of clashes with other commitments), to join the NECHS for one of its day trips. Thirty or so people left the Central Station at Newcastle at 9.30 and headed to Ripon. We had two hours there which was to include time for lunch so I went straight to the cathedral. When we got there one of the vergers asked us if we had come for the service. It was disappointing to see that there was a service starting at 11 as it meant we couldn`t walk round the choir area but when I saw the booklets the lady verger was giving out I was rather intrigued. (For those who may not know the Society of St Wilfrid and Hilda is an Anglican organization for those who, instead of joining the Ordinariate, are trying to preserve a Catholic identity in the Church of England.) I reproduce the front cover of the service booklet here. Our lady verger said they didn`t have a shrine of St Wilfrid so took issue with the description on the front! From what I remember from a previous visit there is a slab at the left of the high altar which marks the burial place of St Wilfrid. I was suspicious of the icon of St Wilfrid on the leaflet which shows no sign of his love for unity with Rome which was what he was all about I would have thought. 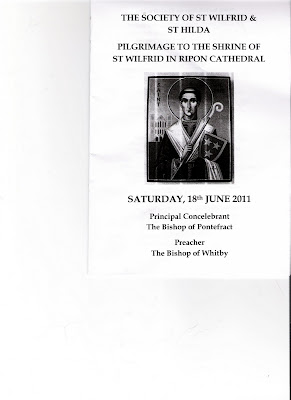 I went to sit at the side of the choir to follow the service. There were about thirteen concelebrating clergy and two deacons, one female, as well as the bishops. I was eager to see how things were done to see if I could spot the `patrimony` bits. One difference I noticed was that they sing a lot more than we do. The opening hymn was `For all the saints` with all eleven verses and the Gospel acclamation was a hymn with six verses! I wanted in particular to hear the sermon. 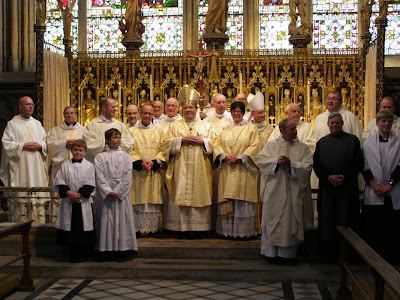 The Gospel was `Thou art Peter` from Matthew 16 which I thought might give material for an interesting sermon. However the bishop of Whitby avoided controversy and spoke about some exhibitions that had been on and were about to start at the National Gallery: the exhibitions with a Christian theme, starting with Seeing Salvation in the year 2000, which have attracted a lot of interest. The response to these exhibitions show that there is a thirst for knowledge about Christianity and, he said, the C of E is well-placed to respond to it. He spoke once about the need to look beyond internal divisions and instead to get on with preaching the Gospel. I left after the sermon as time was running short and I wanted to visit St Wilfrid`s crypt before finding lunch.

After lunch we headed to Markenfield Hall. I had first become aware of it through reading Fr de Malleray`s account of his visit in the FSSP`s Dowry magazine and as the NECHS are always looking for new places to visit I suggested it might make a good day out. Markenfield is a fortified manor house of the fourteenth century and is well worth a visit. The de Markenfields lost possession of it in 1570 after being punished for taking part in the Rising of the North in 1569. 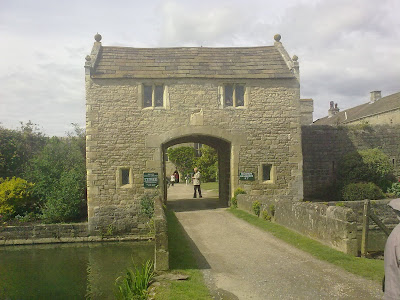 We had a most informative tour after which I was able to celebrate Mass in the chapel. It was particularly moving to think of those who heard Mass in that chapel before setting off for the revolt. The altar is not free-standing so Mass can only be said ad orientem which I was more than happy with...
I had thought that was the end of our day out but we just had time for a quick visit to Knaresborough to visit the shrine of Our Lady of the Crag. As the PP was a classmate of mine at Ushaw I called at the presbytery but got no reply.

All in all a very good day out and despite the forecast for rain we only had a couple of showers in Ripon before the sun came out. I look forward to the next NECHS trip out next year.
Posted by Fr Michael Brown at 4:32 pm

You are a hero to endure that Cathedral service. I hope you had a bath in Holy Water afterwards.:-)

I know your endurance capacity. You put up with me at Ushaw Conference!!

When we had him as our bishop, Wilfrid forbade the men of Sussex to sing hymns in the vernacular - he wouldn't have liked any patrimony hymns at all.

Missa Cantata in the traditional Rite on Tuesday 12th. July at 7.00p.m. at Markenfield Hall.

Alas, when I requested a TLM in the Cathedral a couple of years ago I didn't receive a reply !

I would wager the libretto owed more to Paul VI/ICEL patrimony than that Cranmer.

I am probably being obtuse but I don't understand the comment about the icon.

Rubricarius, it was indeed very ICEL but I thought you would have approved as you tell me the OF can be done up to make a more satisfying liturgy than the 1962 missal.

I though an icon of a saint should bear symbols which will give you some idea about his or her life. In the icon of St Wilfrid I had painted for my last parish he sits with a book open at the words `Tu es Petrus et super hanc petram..` I see that particular icon by Sr Petra Clare on an orthodox website but with the book and its text cut off. This icon says nothing about St Wilfrid apart I suppose from the Roman tonsure but that is an obscure point as I don`t think anyone would think that it was striking that he wasn`t wearing a Celtic tonsure as no-one would recognise one nowadays. The three stars don`t mean much to me but maybe someone can explain them.