This cheered me up this morning 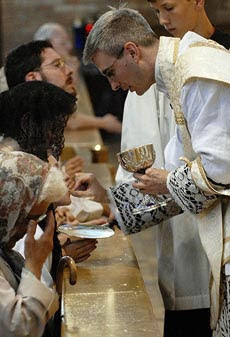 Demand may rise with Pope's approval of Latin Mass
Some view traditional liturgy as divisive, others attracted by reverence
Sunday, July 15, 2007
By Ann Rodgers, Pittsburgh Post-Gazette

Yet more errors in the interpretation of the MP. The Pope has NOT banned the use of the 1962 missal for any of the Holy Week services (including the Sacred Tridium).

Canon Law already prohibits PRIVATE celebration in the Tridium and the MP only reinforces this ban. The relevant clause is part of Article 1 which refers exclusively to PRIVATE Masses.

Where a Parish wishes to celebrate Holy Week in accordance with the 1962 Missal that is absolutely permitted.

As far as the parish's dilema in currently having two Sunday traditional Masses, that is easily solved by moving one to a nearby parish!

Vernon, of course you are right. I`d missed that bit. I thought the rest of it had a lot that was positive.

After 40 years of ecumenism, apologizing, pretending Jews still have a valid covenant, JP II not to mention Pius XII saving more of them than any other person during the 1940s - you would have though they would have the courtesey to keep thoses noses out of internal Catholic affairs.

The cheeck of the ADL and other anti-Christian Jews is astounding.