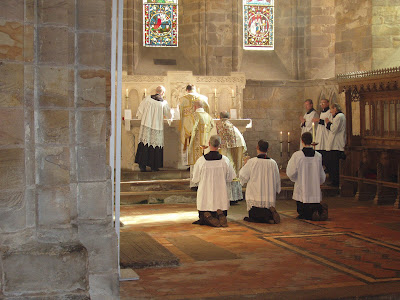 I have recently had confirmation that Mass can take place at Brinkburn, Northumberland, on Saturday September 5th at 12 noon. This will be the 14th year we have gone there. One difficulty I had this year is that the North East Catholic History Society, whose chairman I became recently, always have an outing in September. This year to make life easier they have decided to come to Brinkburn that day. I hope that we will have a Solemn High Mass.

In another development, last year at Brinkburn the heritage consultant expressed interest in Gregorian chant and told some of the choir he would like to encourage the singing of chant at the priory. So a group has formed under the name of the Schola Borealis. Here are the details I have received:

You may be particularly interested in the two workshops for Gregorian Chant under the title Schola Borealis. It is further described by the organisers ~ A day of Benedictine chant. Come along and bask in the tranquillity of this ancient music. All are welcome, whether experienced or complete beginners.
There are two dates, the 2nd May and the 25th & 26th of July. The second date culminates with a sung Mass at noon on the Sunday and is again further described: A weekend workshop in Gregorian Chant celebrating the feast of St James the Greater, Apostle and Patron Saint of pilgrims, and culminating with Sung Mass on Sunday at noon.
Details of the other events can be seen here.
Posted by Fr Michael Brown at 8:14 am

Love the name "schola borealis".
Glad you can do the Brinkburn Mass again this year.

Wonderful news. It was a great privilege to sing at two Brinkburn Masses with the Schola Gregoriana of Northumbria.