We arrived in Lourdes late on Saturday night. When we woke the next morning and made our way to Mass it was impossible not to notice the SSPX were in town. There were men in cassocks everywhere as well as their more exotic Franciscans and Dominicans with full tonsures. On the way back from Mass we spotted them in procession and so I took a few pictures. The thought that went through my head was `C`est magnifique mais ce n`est pas la guerre`. I encouraged our group to pray that there will be a reconciliation soon between the SSPX and the Holy See. 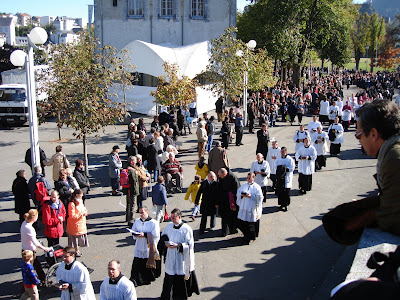 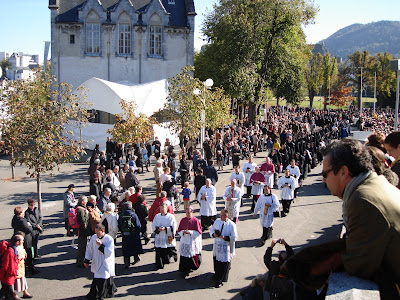 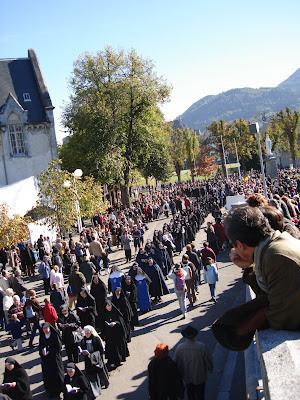 I knew that a couple of priests from our diocese were out in Lourdes and we were hoping to meet up to go for a drink. I caught sight of them at the Sunday night Rosary procession but they didn`t spot me. We did bump into one another the next day. However Fr Swales had caught sight of them the previous day in the SSPX Blessed Sacrament procession! They were looking for us and thought that might be where we`d be. I don`t think they were very clear about the irregular status of the SSPX but they enjoyed Vespers and Benediction. Fr Swales and myself had meanwhile joined the official procession: the one with a host the size of a dinner plate.

Also in the procession was a large group from the Camargue in South East France. Their participation is unique in that they have a horse-back section: the only people allowed to process on horses at Lourdes. I took some pictures. The costumes were interesting and the women looked as if they had stepped out of the chorus of a production of Carmen. The horses went in front of the Blessed Sacrament which made some difficulties for those of us following. Do I need to go into detail? It was hard to imagine something like this happening anywhere in England. Could people from the South East of England dress up and process in their local costumes for any event? What would the English wear? 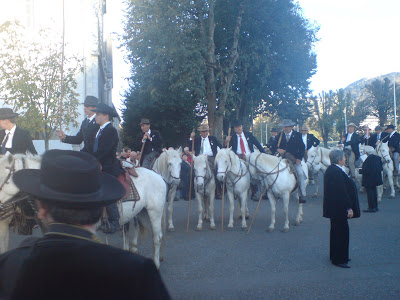 The SSPX had had the use of the underground basilica. On the Monday morning while lining up for our official photo some of our group spotted another EF Pontifical High Mass in the Rosary basilica. We spotted the blue biretta pom-poms of the Institute of Christ the King among the clergy in choir. Apparently this was a pilgrimage by the Domus Christiana ( if I`ve got the name right: I can`t find them on Google) which is a group promoting Catholic family life. We couldn`t find out who the bishop was.

We had hoped to have the EF mass at the grotto during our stay. Our organiser had even been in touch with the Ecclesia Dei commission in Rome who had sent a fax to the Rector of the Shrine regarding our request. I don`t know how it works but I imagine that at the grotto there is Mass in a different vernacular at fixed times and groups are invited to attend OF Mass in their own language and priests to concelebrate. However we did find that the grotto was free for Mass at 6am on the Wednesday. We would have been no trouble as we had all our own gear but we were told that the EF Mass could not be allowed at the grotto. This was a great shame as we had had no trouble anywhere else. I heard a rumour that the SSPX are allowed to have Mass at the grotto but I didn`t see that in our time there and can`t confirm it but that would be a strange irony indeed. Let`s hope that this situation can be sorted out soon.