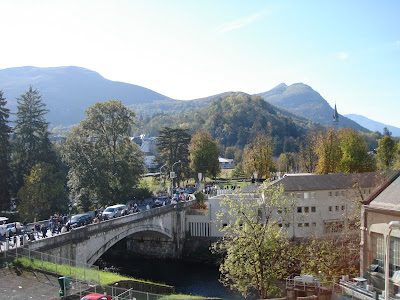 At last I am a real Catholic: I have been to Lourdes! I was very grateful to the LMS for asking me to fill in as a chaplain to the Northern pilgrimage after Fr Hudson ( of the Institute of Christ the King) had found that he couldn`t make it. Fr Swales was the other chaplain with me and I learnt a lot from his previous knowledge of how things are done at Lourdes.

Masses had been arranged for everyday in the EF. There was to be one public Mass each day with sermon and the other priest would say a private Mass which people were free to attend too. Fortunately most of our chapels were booked for two hours so that allowed us to say one Mass after the other.


We had Mass on Sunday in St Michael`s chapel, Monday in St Ann`s, Tuesday in St Gabriel`s and Wednesday at the delightful church at Bartrès. On the last morning we had Mass in the hotel bar at 6 am!


Our group was quite diverse. the youngest pilgrim was Teresa who was fourteen months old (with her parents who had only become Catholics a couple of years ago) and the eldest was Anna who at 94 was sprightly and full of fun. Anna had been on the 1929 Hexham and Newcastle diocesan pilgrimage to Lourdes! In all we had 38 pilgrims in the group and most were from the North-West. Many attend the Masses said by Fr Hudson in that part of the world. Conversation often included accounts of liturgical horrors. The one that sticks with me was the account of the parish priest who changes the words of the Mass so that people are to say before Communion `Lord I am worthy` rather than the normal response. However I believe he has given up on that experiment now. Another was the priest who felt that the large outdoor crucifix in front of the church needed repair and wondered whether something else could be put there instead of the crucifix. He had been heard to remark about the crucifix that the figure wasn`t even smiling!

Here are some photos. Our Masses were all Low Masses as while, as chaplains, we had taken many things for the celebration of Mass (missal, vestments, altar cards, chalice, ciborium, Communion plate) including a thurible and acolyte candlesticks was more than we could manage. However we had a hymn before and after Mass and at Bartrès the congregation sang the ordinary to the Missa de Angelis.


Here I am celebrating the Sunday Mass in St Michael`s chapel. 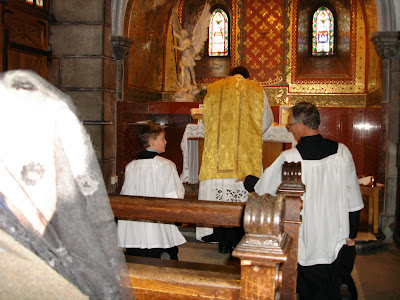 I was particularly pleased to get this photo during Fr Swales` Mass as it demonstrates an aspect of Catholic life on the continent that has always fascinated me. Why is it that whenever I attend a Mass there is always someone who decides to stand for the whole thing and blocks the view of the priest? Do these people never think that there might be anyone behind trying to see? It happens all the time and even during the consecration. 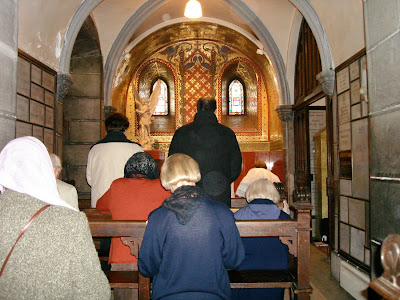 This is a very indistinct picture of Fr Swales celebrating Mass at Bartrès, taken with my mobile phone. 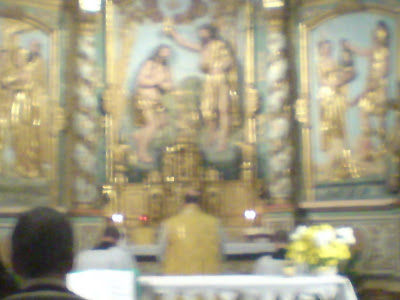 There will be a full report in the next issue of the LMS magazine, with, I`m sure, better pictures. Many thanks go to Ann Archer for organising the whole pilgrimage
Posted by Fr Michael Brown at 11:22 am

It is most interesting to read priests' experience of celebrating the "old" Mass at Lourdes since Summorum Pontificum. Apparently, quite a few still have problems with the authorities there.

I don't think standing is about blocking anyone's view but rather about following the rubrics. What most people, even cradle Catholics don't understand, is that when the liturgy is celebrated properly then, outside of penitential seasons and Masses for the Dead, most of the time they should be standing.

Old Believer, I didn`t think there were any rules for the laity at Mass in the EF. I would expect any Catholic to kneel for the consecration. The rest just strikes me as good manners.

Old believer, could you provide a source for your comment please.

If those people wished to stand surely good manners required them to be in the back seat or the side aisle so that they didn't obstruct anyone's view.

Yes, this was one of the first things which struck me when I first visited France may years ago. Standing at Mass seemed to be a matter of local custom.

I remember watching the televised Requiem Mass of President John F Kennedy in 1963. Among the vast congregation of foreign dignitaries, President Charles de Gaulle seemed to be the only one standing !