While I was in Edinburgh the LMS were having their annual Requiem at Westminster cathedral. The LMS have kindly sent me pictures which you may well have seen on other blogs but since I`ve been sent them, it seems a pity not to use them. There is a press release too. 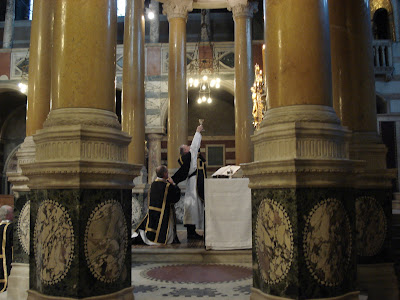 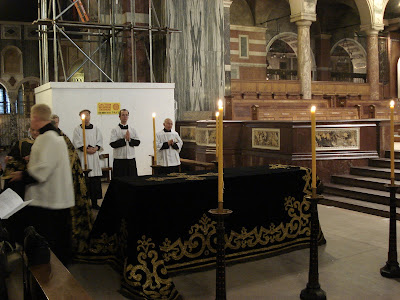 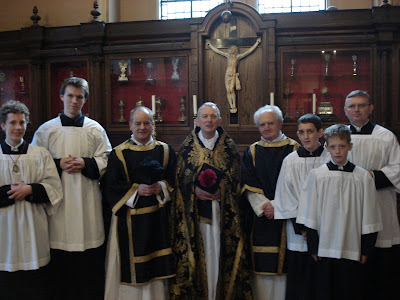 Latin Mass Society Celebrates Its Annual Requiem Mass in Westminster Cathedral
Father Antony Conlon, National Chaplain of the Latin Mass Society, celebrated a High Mass of Requiem in the Extraordinary Form of the Roman Rite in Westminster Cathedral on Saturday 22 November for the repose of the souls of all deceased members and supporters of the LMS. Father Tim Finigan was Deacon and the Sub-deacon was Fr Patrick Hayward. Gordon Dimon of the LMS was MC.

A congregation of about 600 heard the men of the Cathedral Choir sing traditional plainchant.

For the first time in many years, the Mass was followed by the traditional ceremonies of Absolutions at the Catafalque. Many in the congregation said afterwards how pleased they were that this ceremony had been reinstated.

Before Mass, a wreath was laid by Julian Chadwick, Chairman of the LMS, and other LMS Committee members on the grave of Cardinal Heenan in the cathedral nave in thanksgiving for the Cardinal’s efforts to preserve the Extraordinary Form of the Roman Rite. Father Antony Conlon read prayers for the occasion.

John Medlin, General Manager of the LMS, said afterwards: “The LMS is grateful to Canon Christopher Tuckwell, the Cathedral Administrator, for his friendly help in organising our ceremonies. We feel that the Extraordinary Form now has a settled part to play in the life of Westminster Cathedral and we shall be putting some ideas regarding improved provision to Canon Tuckwell soon.”

Note: The Extraordinary Form has now returned to several of our cathedrals throughout England and Wales and the LMS is actively seeking to introduce further Masses.
Posted by Fr Michael Brown at 11:25 am

I was most intrigued by the Latin Mass Society's announcement that it will be "putting forward some ideas for further provision" [of the old Mass] at Westminster Cathedral.

What, I wonder, have they got in mind ? It sounds like A Good Thing.

Another significant Requiem took place in London today - an Anniversary Requiem to mark ten years since the death of Richard Hoban. It was celebrated in the Little Oratory by Fr Ignatius Harrison. A very accomplished 'scratch' choir (many of whom had sung with Richard) filled the Little Oratory with Victoria's 6-part setting. A wonderful and moving occasion and a fitting tribute to someone whom many of us still remember with great affection.