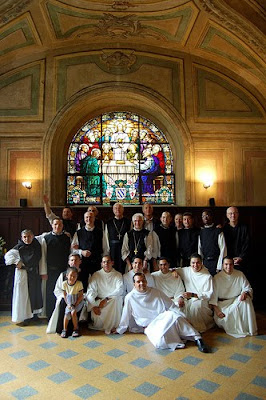 A few days ago Rorate Caeli mentioned the suppression of the Cistercian monastery of Santa Croce in Rome and provided links to sites which spoke of ` liturgical abuses (documented by photos of nuns dancing around the altar), intrigue, rumours of questionable behavior and lack of moral discipline in the monastic community`.

Now AFP has taken up the story and has a report with a little more detail.

ROME — Pope Benedict XVI has shut down a famous community in Rome that organised dances by a former nightclub dancer nun and hosted VIPs like Madonna, earning the disfavour of the Vatican.

The closure of the monastery of Santa Croce in Gerusalemme, which holds some of the Church's most prized relics, was reported by Italian dailies La Stampa and Il Foglio.

The reports said the community of Cistercian monks based at the church for more than five centuries was being transferred to other churches in Italy.

Contacted by AFP, the Vatican did not deny the reports.

The basilica had become a hub for the "Friends of Santa Croce", an aristocratic group, and had been criticised for some unorthodox practices including dances in which nuns pranced around the altar.

One of the nuns who performed at the church, a former disco dancer, can be seen in a YouTube video performing a modern dance with a crucifix.

The basilica's longtime abbot, Simone Fioraso, a flamboyant former Milan fashion designer, was already moved out of the basilica two years ago.

The ban was adopted in March by the Congregation for Institutes of Consecrated Life following an inquiry but has not yet been made public, the reports said.

Pope Benedict, the leader of the world's 1.1 billion Catholics, is also the bishop of Rome, so the basilica is part of his diocese.

Santa Croce in Gerusalemme, built around a chapel dating to the fourth century, is one of Rome's oldest and most prestigious churches.

Can`t find the video of a nun dancing rouond the altar but the church does seem to have featured in a lot of televised concerts of religious music. Here`s one:


It will be very interesting to see who takes over the monastery.
Posted by Fr Michael Brown at 8:32 am

I am certain that Sceptical Believer's friends, the all-singing and all-dancing Little Barry Sisters of Milvain Club fame will be already preparing for the takeover.

I understand that since it is some time since Sceptical and his Sisterly fellow dancers have tripped the light fantastic, then it will be necessary for some alterations to be made to the structure of the building, such as a parking space for Zimmer frames, and easy access to quite numerous "comfort stations".

Sadly, I am in Dublin for a day or two helping the Irish economy (and how) so am unable to comment on this item but will endeavour to do so asap on my return.
I have some memories of a visit to Santa Croce in 2002 which I am anxious to share with others and which may help to explain the events described in Wooden Rumours (or whatever the blog is called?)
Is there more than one church with the name of Santa Croce in Rome, please?

I suspect the video is probably this one:

The dance is about 4.5 minutes in.

Sorry - I accidentally pasted the wrong link. I meant this one:

Thanks for the links. Is that Santa Croce? It doesn`t look like the main church.

Shades of "the smoke of Satan has entered the Vatican". Was it Paul VI who said that?

I don't know, I imagine it's all explained in the interview parts, but I don't understand Italian. My guess is that it is the chapel of Sister Anna's convent.

Isn't it concerning that one of the strictest Orders in the Church goes down this road? As Pastor EF said "the smoke of Satan" but hear we still have a fire burning.