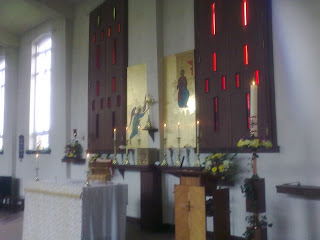 While I`m waiting for the lunch to cook I thought I`d take the time to wish everyone a Happy Easter. I`m feeling rather exhausted just now and fell asleep last night watching an interesting programme on the Shroud of Turin. I`m sorry to have missed the ending and hope I can find it on one of those playback sites.
Maundy Thursday had a reasonable turnout of parishioners. I`m alway impressed by Catholics who come for this Mass as it is the least high profile of the Triduum ceremonies and people who come just want to enter into Holy Week as fully as they can. I failed to remember to buy a football rattle for the clapper used in place of bells at the consecration but I did have a plastic baby`s clapper thing which makes a suitable noise and I`m glad to say it was used to good effect.
Good Friday saw a large number of people at the Stations of the Cross at 10pm. I quite like to use the version by bishop Konstant on Good Froday but couldn`t find the book so we had the ones by Fr Cormac Rigby which I also like. Just before anyone is worried we did have the St Alphonsus Stations on two of the Sundays of Lent.
At 3pm we had the Solemn Commemoration of the Lord`s Passion and I was glad to see we had four altar servers turn up to help with the ceremonies. The church was full and all went well. At 5pm we had the same liturgy in the Extraordinary Form. This was thanks to the Jarrow men who offered to sing and who were helped by 1569 Rising and the former director of the now defunct Schola Gregoriana of Northumbria, Ian Graham. While I was worried about whether we would have enough servers, in the event we had four which was just about enough. The 3pm liturgy finshed just after 4 and we began rehearsing for the 5pm at 4.15. So I was delighthed that we had the resources to celebrate the Extraordinary Form and many thanks to all who helped. However it was rather sad that so few of the faithful availed themselves of this opportunity. From even among the avowed adherents of the Extraordinary Form in this diocese few came. Some preferred to attend the OF as they said the time of 5pm was inconvenient and others just didn`t seem interested.
The Easter vigil started at 8pm and despite a day of heavy showers the weather held to enable us to have the Easter fire outside. I hadn`t said anything to encourage people to make this their Easter Mass. It was a pity that not more came to this, the central liturgy of the Church`s year. Our music group had worked hard and did very well. I would say about 60-80 people attended and then we had refreshments in the hall with a simnel cake made by a parishioner and wine.
This morning although the promised sunshine didn`t happen, the church looked its best and was absolutely packed. I had said the 9.15 at Longbenton first where all went well. Then it was the 10.30 at St Mary`s. A rousing rendition of Thine Be the Glory concluded the Mass.
Posted by Fr Michael Brown at 1:00 pm

And God bless you for all your hard work.

Got home from the EF Missa Cantata at St Joseph's Gateshead - celebrated as a replacement for the 9.00 Parish OF Mass. Great singing from the Jarra Lads' Schola - Lux et Origo, propers from the Liber, Christus Vincit, O Filii et Filiae, and Regina Coeli at the end. Many compliments from the congregation (who normally attend the OF Mass)

Got home in time to see most of the Anglican Eucharist from Winchester Cathedral - very High Church, almost indistinguishable from our NO, but celebrated with dignity and style.

One interesting point - Communion distributed by (in the main) male clergy, with recipients KNEELING.

If this is the Anglican Patrimony, then yes, please! (sorry, fellow Traddies)

I'm tired after Triduum too.

If the Shroud programme you mention was the one on More4 last night, which was indeed v interesting, then it should be available from 4 On Demand.

Dear, 1569 Rising,
Thank God for Ye auld Jarra Lads! no doubt I will see some of them in the local soon too! From Jarrow's Tower the Vesper etc! Glorious St Bede pray that we may Praise God for all Eternity!
LADATE JESU CHRISTE!

A very happy Easter, Father, and thank you for all the good work you do.

Well done Father, it is an exhausting schedule and you deserve a good rest.
I've been a bit over exposed to 'Thine be the Glory' though - vigil last night, morning mass today, also at the local anglican where I called in to hear their choir, and even on the radio broadcast from Westminster Cathedral - there are other Easter Hymns!

Belated Happy Easter but I was away. It sounds a good week at Forest Hall.