You may have seen elsewhere on the blogosphere that the committee of the International Federation Una Voce went to Rome recently and their president was introduced to the Pope. This may not mean a lot to some people so let me explain. The Federation is the umbrella organisation for the many branches of Una Voce around the world. The federation has existed since 1967 although its roots go back to 1965. It is a lay movement which exists to preserve the traditional form of the Roman liturgy. The English Latin Mass Society is a member. For a full explanation see here.

Naturally with the promulgation of Summorum Pontificum their work has assumed a higher profile and the committee submits reports to Rome about its implementation. In this picture we see the Holy Father being presented with the latest report on October 28th. 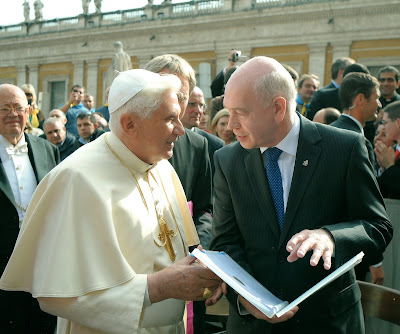 The current president is Leo Darroch. He is well known among Latin Mass supporters in this diocese as he lives here. Hexham and Newcastle has a very high profile layman in the person of Leo. Let`s hope his good work bears fruit.
Posted by Fr Michael Brown at 4:39 pm

Does Mr President Darroch regularly attend Traditional Latin Masses in the Diocese of Hexham and Newcastle?

President Leo is a very faithful and most regular attender at the Gateshead Mass each Sunday, when he is not schmoozing at the Vatican. We are very privileged to have him in our Diocese. (sorry, Leo, I know I am a creep!)