For quite a while now I have had a crucifix ready to hang in the church to replace the figure I inherited on the back wall. When the La Sagesse convent closed in Newcastle I heard they had a large crucifix they were willing to let us have and it being from a La Sagesse house I expected it to be tasteful which it is. The figure on the back wall of the risen Christ standing in front of the cross with a large smile just didn`t work for me and the parish council were also happy with the suggestion of putting up the La Sagesse cross as there had been a crucifix hanging there in the original design of the church. The workmen who put it up visited a couple of other Newcastle churches which have the same arrangement to see how it could hang from the arch and made a very good job of it.

There is now an outline of the former cross on the back wall. I tried to pass this off as having mystical significance and representing the risen Christ. It reminds me of the cross in the iconoclastic church in Istanbul on BBC4`s History of Christianity this week! However as you may remember there is an icon of Christ on it`s way which may be here for Easter which will occupy that panel. From the main aisle this will be partially blocked by the crucifix but I`m happy about that as it signifies that the way to glory is through the cross. The icon of the Annunciation for St Mary`s Forest Hall should finally arrive in time for December 8th. 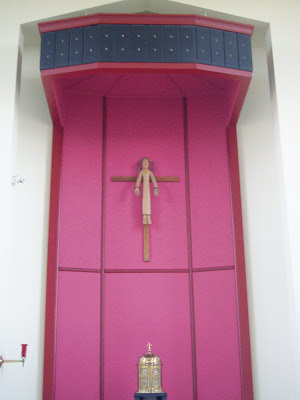 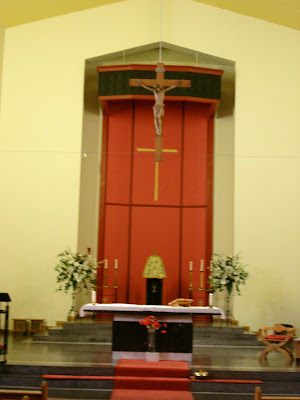 This second photo was taken rather quickly and I may go back and try to get a better one.
Posted by Fr Michael Brown at 11:34 am

The new crucifix does look much, much better. And even the outline of the old cross works well too, in the photograph at least.

The La Sagesse crucifix is definitely much better! I hate to say it, but the previous one was rather ghastly.

Thank you for replacing the 'rag doll Jesus', a source of distraction during some beautiful sung TLM's in SS Peter and Paul! Hope it goes for firewood along with the ghastly one at Minsteracres, lauded in the Northern cross recently at its blessing.

Don't worry, Pat, anything lauded in the Northern Cross is like the kiss of death.

Father, will the Court of Human Rights demand that you place the following notice outside the church..

WE APOLOGISE FOR ANY OFFENCE WHICH MAY HAVE BEEN CAUSED.

The previous one looked like a mockery to me - like so much of contempory religious art. Good riddance.

Despite being a lapsed Catholic of very limited faith, I remember that the previous Crucifix made a very strong impression on me as a child, inspiring awe and wonder.
It also presided over my parents' wedding, my brother's baptism, the funerals of two grandparents and an aunt. Therefore, I am disinclined to subjectively dispute the merits or otherwise of this "mockery" of a sculpture as others have, suffice to say that it left an indelible imprint on my early spiritual life.

Thanks Paul. What can I say except that it irritated me? Sorry to hear you are lapsed. Sadly Longbenton parish is rather short of numbers these days and I`m sure if you decided not to be lapsed you would be welcomed back.