This morning`s post brought a vestment catalogue from church suppliers, Ormsby of Scarisbrick. Another supplier sent a catalogue a few weeks ago and I remember pointing out to anyone would listen, after Mass, that they always seem to have a picture on the front of these things of a beautiful, intricately-decorated vestment and then the usual horse-blanket style chasubles inside.
I browsed through the Ormsby catalogue and was surprised to see for the first time I can remember, a number of Roman-style chasubles included. Now I know that the EF does not require Roman vestments. I happen to prefer them myself but it isn`t the end of the world if I wear a Gothic vestment and normally I will choose to wear something Gothic a couple of times a week. However it is fair to say that a few years ago there would have been no demand for such things so they must be responding to requests and those requests must come from people looking for something more hermeneutically continuous. (Before I get a deluge of comments, I should say I know about the history of vestment design and am using the term in its loosest sense.)
The advertised vestments come with stole, veil and burse but alas no maniple so are not that useful for the EF anyway. I also have to say that I am quite particular about the vestments I buy and none of the designs on offer appealed to me but I thought it was worth blogging about. Some of the Gothic examples they have are rather attractive.
Oh and the picture on the front of the catalogue has a priest and deacon in Mass vestments with their backs to the viewer. Maybe next year there will be a subdeacon too! 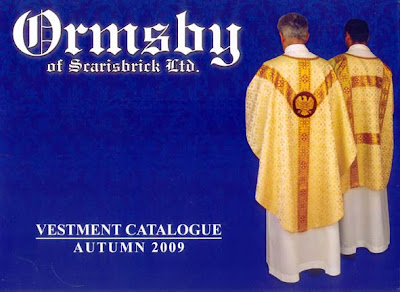 Maybe if yourself was to write these fellas they would start to put maniples in with the package?

HEEEYYY!!! Are you suggesting that horse rugs are in some way inferior to those beautiful vestments? Let me show you what colourful attire there is available for horses nowadays. I am attempting to attach two photos and when I find the picture of horse pyjamas that I saw recently I will send that too. You can tell whoever it may concern that the average horse is better provided for in terms of vestments than are you!
Some hours later.... Unfortunately I couldn't work out how to attach photos to a comment (grrrr!!!!) but look at www.rideaway.co.uk and see turnout rugs, stable rugs and under rugs. For horse pyjamas, try tarkaequestrian.co.uk

Err thanks Pony Owner, that wasn`t a direction I thought the comments would take!

I`m sure there are lovely horse blankets but I suppose `horse-blanket` was a general term of disdain used in seminary for the very simple, rather heavy and large vestments that seemed to be favoured.

Maybe we need find another name for these creations.

What these priests need is a server who can take some of the weight off their shoulders at the elevation.

(They do elevate the Blessed Sacrament for the faithful to reverence, don't they?)

I've found this site: http://www.kirchenausstattung.at/
Then go to Messgewaender on the left hand side menu. You can see a selection of Roman style chausubles under the heading "Kasel Roemisch". There are some beautiful ones. I like the Marienkasel und "aus violettem Damast".
You can also see a full range of other vestments by clicking on the links on the left - helpfully organized in colours. There are some lovely Kasel fuer Marienfeste but be warned, some of the other Messgewaender are pretty grim....
They will deliver to anywhere in the EU free if you spend more than 250 euros and if you don't spend that much it is 12 euros for postage and packing.

I couldn't find anything like the black cope that my priest was wearing at a funeral on Saturday. He wore this to accompany the body and mourners from the chapel in the graveyard into church, then changed into ordinary vestments and changed back again into the cope to process out to the graveyard.
It wasn't like any funeral I have attended in the UK!

Em thanks for the link. they are more the kind of thing I like. I have a Polish site which looks promising too: http://www.zygzak.com.pl/ with the links for ornaty rzymskie.

If you attend an EF requiem in England you should see something similar with the cope to that which you describe.

Simon, maybe they are not so heavy after all. Some vestments I bought for a parish where I no longer say Mass ( semi-Gothic made of a brocade) have been rejected by the current clergy on the ground, among other things, that they are too heavy.

There are some on ebay too from Poland and India though not as attractive as the ones on the Austrian or Polish sites.

It was a beautiful requiem Mass - a fitting send off for an 87 year old lady who had told our priest only last year that she was excited for the beginning of her eternal life.

Vestments too heavy? For probably no more than 45 minutes and indoors? Some priests should try working outdoors for twenty years in all weathers, eight hours a day, wearing heavy clothing and wellingtons (and still often ending the day wet through). Then they might have some reason to complain.

Reference the Vestments by Ormsby of Scarisbrick Ltd, a maniple can be made to match any vestment set upon request. (There is no point in including a maniple when 80% of our clients don't require one). Moreover, any article (vestments, woodwork, marble etc) can be made to any design and frequently are made to clients exact specification. It is difficult to be all things to all people all the time - we can only try!
Mrs P Ormsby
DIRECTOR
ORMSBY OF SCARISBRICK LTD

Mrs Ormsby thanks for your comment. I hope my comments came across as appreciative of your work. Is it fair to say that you are responding to an interest in Roman style vestments?