I received the following information from the LMS regarding the recent confirmations in London. Good to see that these are still going on and I`m sure part of the excitment for the children is a day out in London, if they are from outside the city, but I hope we will see this happening elsewhere round the country before too long. Well done LMS.

Bishop George Stack, auxiliary bishop in Westminster, administered Confirmations in the Extraordinary Form of the Roman Rite (Traditional Latin Rite) at St James’ Church, Spanish Place, London W1 on Saturday 7 November. 32 candidates received the sacrament – 27 children and 5 adults. This was the sixth year of the annual ceremony organised by the Latin Mass Society.

As usual, permission for the Old Rite Confirmations had been given by Cardinal Cormac Murphy-O’Connor, now Emeritus Archbishop of Westminster.

The candidates’ day began with a catechetical meeting in the Lady Chapel with Bishop Stack. The Confirmation ceremony followed and the liturgical ceremonies were concluded with Pontifical Benediction of the Blessed Sacrament.

The choir and organist of Spanish Place provided the music, and a large congregation of over 400 family and friends joined them in singing the Veni Creator Spiritus and other traditional hymns. During the anointing, the choir sang polyphony and plain chant.

After the ceremonies, a reception for the bishop and congregation was held in the crypt. Bishop Stack met and chatted with the newly-confirmed and their families and cut the celebratory cake.

Doctor Joseph Shaw, Chairman of the Latin Mass Society, thanked Bishop Stack for his pastoral concern for those attached to the Extraordinary Form and led the families and children in a rousing round of applause. 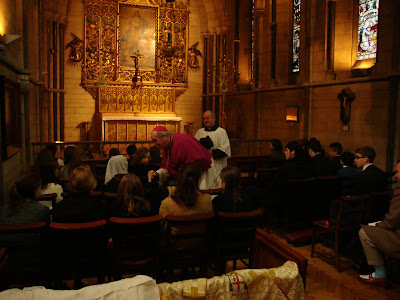 Bp Stack greets the children in the Lady Chapel. 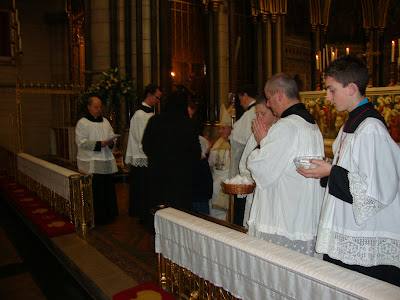 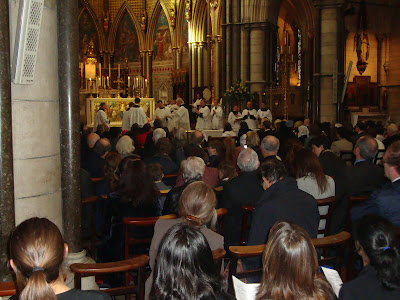 Ceremonies and the crowded nave 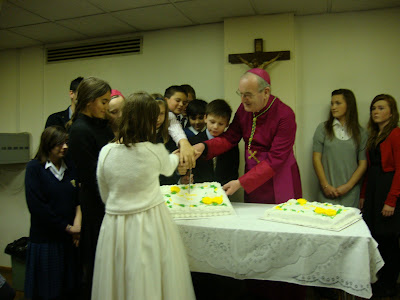 Children helping Bp Stack to cut the celebratory cake
Posted by Fr Michael Brown at 11:34 am

I was puzzled by this statement.
"As usual, permission for the Old Rite Confirmations had been given by Cardinal Cormac Murphy-O’Connor, now Emeritus Archbishop of Westminster."

Why should an Auxiliary Bishop of the Archbishop of Westminster require permission from an Archbishop Emeritus (the status of Cardinal is irrelevant here) to confer confirmation, whether in the ordinary or extra-ordinary rite?

Quote: "As usual, permission for the Old Rite Confirmations had been given by Cardinal Cormac Murphy-O’Connor, now Emeritus Archbishop of Westminster."

These things are arranged many months in advance and long before Archbishop Nichols moved to Westminster.