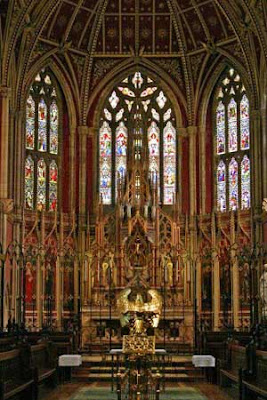 The Leeds LMS blog`s had a post a few days ago concerning a training conference for the Extraordinary Form to be held at Ushaw in February from Tuesday 17th. - Friday 20th. Apparently this will not be instead of the Oxford training conference.

I`m glad something is happening on this front after the one day conference planned for last year was cancelled. In many ways Ushaw is an ideal setting and with its many side altars should make priests` Masses easier than at Oxford. I can think of a good number of well-qualified priests from the Northern Province who I hope will help out.
Let`s hope it will appeal to priests who are at present curious about the EF but uncertain as to how to proceed.

The LMS Committee agreed today to sponsoring its first Northern Conference to train Priests in offering the 1962 Rite of Mass. Mr. Waddington, who acknowledged my own input in the proposal presented the paper which was received enthusiastically for a variety of diverse reasons.
The Conference is scheduled to take place in February in one of the most northerly English Dioceses. Issues and suggestions raised by the clergy who attended Merton in the Summer will be addressed at this Conference as good practice demands.
This Conference is not instead of the Oxford Conference but in addition to it.
Posted by Fr Michael Brown at 4:37 pm

To see High Mass celebrated at the beautiful magnificent altar would truly be a sight to behold. As for that matter would Mass at any of the numerous side altars. I think the chapel is far more visually pleasing than Merton College chapel.

BTW Fr do you know when they stopped using the high altar?

I hope this is more successful than the last LMS attempt to organise such an event at Ushaw, which was scuppered by lack of interest from priests.

So do I. It was a pity the last time but I think this time there is a greater chance of success as it is being promoted in the whole Northern Province, rather than just Hexham and Newcastle, and is to be held over a number of days.

It is, of course, excellent news that extra opportunities are becoming available for priests wishing to learn how to say the Extraordinary form of Mass (even though the results of the two previous events seem to be somewhat slow in materialising). However, it is surely extraordinary that such initiatives (and the heavy costs involved) are being undertaken by the independent, laity-led Latin Mass Society and not by the Bishops of England and Wales. The wishes of the Holy Father in regard to the Extraordinary form are well enough known to make it obvious where the real responsibility for such training is: it lies with the bishops and until they either individually or collectively set up training opportunities I feel the laity must be excused if they harbour some suspicions as to their Lordships willingness to give the laity the Old Mass on anything but an occasional basis.

I agree, Sceptical, that it would be far better iof our bishops organised training for the clergy but in the absence of any such initiative (except I believe in the diocese of Leeds) the LMS is doing good work.

Let`s hope we get a good turn out in February.