A few days in Scotland 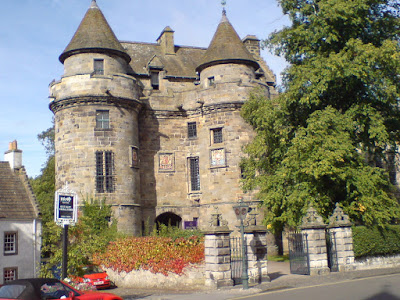 Last week Fr Briggs and I ventured north of the border for four days, two in Edinburgh and two at St Andrews. We went to a couple of concerts and an opera (Szymanowski`s King Roger) at the Festival and then headed off to Fife. At the first concert we had the good fortune to run into Fr Andrew Southwell, who is well-known in traditionalist circles. I said we were planning to visit Falkland Palace on the way to St Andrews as I remembered it being a place with Catholic connections and Father was able to tell us it has the unique distinction of being the only royal palace with a Catholic chapel. The last member of the royal family to visit Falkland was Charles II! It had fallen largely into disrepair until the third Marquis of Bute took over as Keeper in 1887. The main gates are seen above. Below is the interior of the chapel. 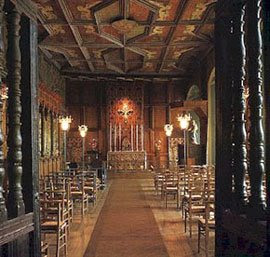 I can`t remember the last time I was in St Andrews and it seemed strange to be back in the place I was a student. Most of my memories of my time there involved bad weather so we were lucky simply to have cloudy weather one day and real blue skies and sunshine the next. Many vocations have come from the university. In my time at the English College in Rome there were six former students in the city studying for the priesthood and five of them were ordained. I was able to show Fr Briggs ( who had never been there before) some of the sights. Unfortunately we didn`t get in to St Leonard`s chapel where, a few years ago, I acted as subdeacon for the Requiem Mass for Miss Neilson, the president of Una Voce, Scotland for many years, but I was able to point out the tomb of bishop Kennedy in St Salvator`s chapel, the university chapel, (see picture below) where in a fit of youthful Catholic zeal one student managed to deposit a statue of Our Lady in one of the niches of the tomb. 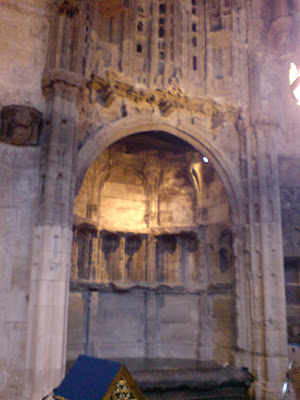 I believe he was found out and reprimanded. Shortly after I left, Catholic student life really took off in a big way at the university through two groups, one led by the Faith movement and another which supported the Extraordinary Form of the Roman Rite. I`ve no idea what goes on there now in the Catholic chaplaincy but hope it is still producing vocations to the priesthood.

Next time, keep heading North: we will give you a very warm welcome in Orkney.

Ben, I was thinking of Frs Martin Edwards, Patrick Burke, William Massie, Dominic Rolls and Martin Boland from my time in Rome. Alex Todd was the other alumnus in Rome and although he wasn`t ordained he is chairman of Una Voce Scotland. Fr Jeremy Fairhead was in St Andrews in my time although then an Anglican. Fr Sean Finnegan of the Valle Adurni I knew at St Andrews and I believe Fr Marcus Hodges OP was there too as he was a friend of a friend. Joe MacManus I have met since leaving. However all these people were there in the eighties. Does St Andrews still churn out as many vocations today?

Back in February I was on a Discernment Retreat at Ushaw and one of the retreatants was a student at St Andrews, David Edwards from Lanchester. A more enthusiastic and holy young man you couldn't hope to meet. He was hoping he could maintain the desire and attraction to priesthood beyond his degree course. I'm certain this will happen.

Delighted to hear about David Edwards. No relation to Fr Martin Edwards I expect. Glad to hear you are trying to discern a vocation too.