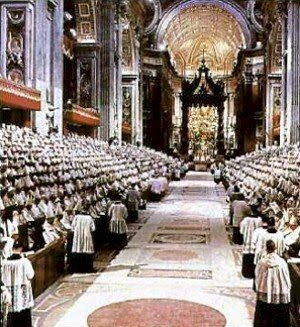 Nice to read today that preparations are being made for the third Vatican Council. Strangely it will be launched in South Korea because that is the base of the excomunicated Archbishop Milingo whose initiative it is. So nothing to do with the Vatican then. I think he probably incurs another penalty for trying to organise a General Council without a Pope. Canon 1372 establishes a censure for taking recourse against an act of the Pope to an ecumenical council so I`m sure trying to call one without the consent of the Pope would also be punishable.
Here`s the story from the Zambia National Broadcasting Corporation:

Ex-communicated Catholic Archbishop, Emmanuel Milingo says the Movement for Married Priests is in the process of establishing the third Vatican Council to shape the future of the renewed Catholic Church.
Archbishop Milingo said the third Vatican Council will be launched in South Korea before the end of this month.
He told ZNBC news shortly before he and his wife Maria Sung left for South Korea that proposals for the foundation have already been made.
Archbishop Milingo also said the movement is preparing for the Universal Peace Federation meeting.
He indicated that faith based groups will soon hold a symposium on Catholicism.
Archbishop Milingo boasted that his organisation will provide air tickets for delegates from the Zambia Episcopal Conference (ZEC) if they are willing to attend the ceremony.
The Archbishop, 78, leads 150,000 married priests across the world.
He was ex-communicated for holding divergent views from the Catholic Church and marrying priests.
Posted by Fr Michael Brown at 8:06 pm

What amazes me is this nutbag was made a bishop at all, much less a priest.

Oh dear, whatever is Milingo on about now ?

Is he attempting, mutatis mutandis, a re-run of the infamous Synod of Pistoia ? He should read the history of that event.

I doubt the Catholic Church will be too worried about the "Council" called by this excommunicate, but I can't help feeling he should have been deprived of his clerical status a long time ago.