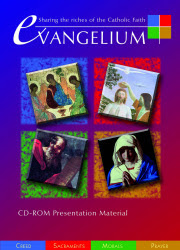 I am glad to report that our Evangelium course( produced by the CTS) has finally got off the ground. I had hoped to start in January but the need to acquire a lap top and a data projector slowed things down somewhat. So far we have had three meetings at SS Peter and Paul`s, Longbenton and have looked at the first two sessions in the course ( after an introductory meeting). I had worried that the material was not enough to last an hour but the first session lasted 90 minutes! I`m not sure how many people are following the course as numbers have varied between eight and twelve. We have two people who are seeking to become Catholics but as they can`t make all the sessions I will have to supplement the ones they miss with the more traditional converts` meetings. However the material is great to use and the art work is a joy. The discussions have been interesting and even life-long Catholics have said they have learnt something new. It would have been great to have had thirty or forty people attending but we live in hope. If anyone is thinking of using Evangelium I can thoroughly recommend it.
On another note I was interested to read in the Pope`s book on Jesus that evangelium was the term used by Roman emperors for their public decrees (p. 46-7). I`d never come across this before and can find no reference to it in the Oxford Latin dictionary or Lewis and Short.

I've been using it in our parish for receiving into the faith and confirmation purposes and have found it very good for both. Some of the sections are better than others and I devoted a whole session to the 4 last things and a whole session to Mary rather than lumping them together as one session.

Whilst the majority of the artwork is stupendous, some of it is ghastly (one in particular showing the Trinity and the Crowning of Our Lady in Heaven springs to mind)and so bad/uninspiring I had to devise my own sessions. Still, you'll never please everybody.

The use of old masters also doesn't give a feel of a living, vibrant, catholic (small c) Church. I think it could have done with some of the excellent devoltional art material form other continents or even photographs showing the reverence of the Blessed Sacrament shown in Asia and Africa.

Overall very useful, for all ages from 14 upwards.

Thanks for your reflections Fr.Anonymous. I haven`t got that far with it so will watch out for the challenging artwork. I quite enjoy the use of old masters rather than more modern images. I`ve had more than enough of up-to date and `relevant` presentations and I thought this approach conveys a timeless atmosphere and helps us to appreciate the centrality of the faith to much of our cultural development.I`m really grateful for anything new today that doesn`t involve large ladies dancing around a sanctuary in gym-wear waving flags.

Does H&N have an "offical" line on this resource Father, for instance from our education department?

I asked in the education office and the reply was that it was ok but it needed to be supplemented with other material. I haven`t found this to be necessary.