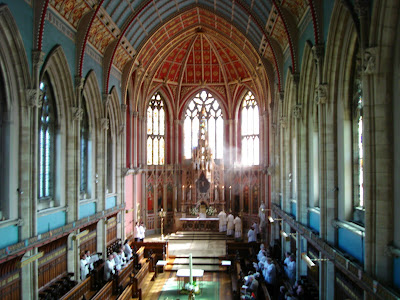 Words can`t express how marvellous this week at Ushaw has been. I realise that part of this for me was that having been a student there for five years I never thought to see St Cuthbert`s chapel and the other altars used for the Extraordinary Form Mass. Nor did I ever expect to celebrate a High Mass on the high altar.

There was so much to enjoy: coming down in the mornings and seeing a hive of activity in the sacristy as priests got ready to say their private Masses or others returned from their altars; seeing the Masses in progress as I made my way to an altar, singing the offices of Lauds and Vespers; finally seeing the throne above the high altar used for the Blessed Sacrament during Benediction; the company of about thirty like-minded priests; the dedication of the altar servers; the beauty of the chant; the wonderful organ playing of Peter Locke; Byrd`s four-part Mass today; the fabulous vestments provided by Richard Luzar; the good food and the glorious weather on Monday and Wednesday. I can`t wait to do it all again next year.
Oh yes there was teaching as well. I was teaching an advanced Low Mass group. It is over twenty years since I studied the rubrics so I found it as useful for myself as I hope my group of three found it. I discovered I`d been making quite a few mistakes!
Well done the Latin Mass Society, and especially Paul Waddington, for all his work in making it all happen. 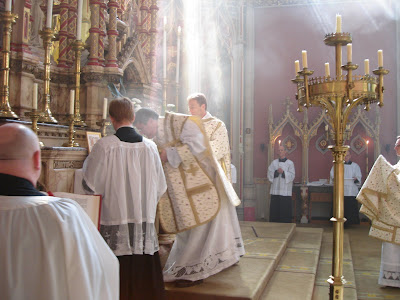 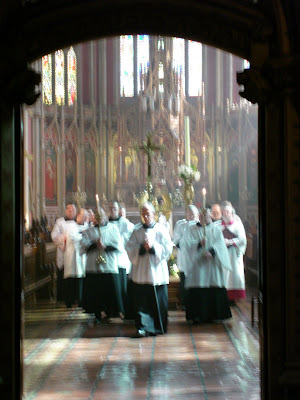 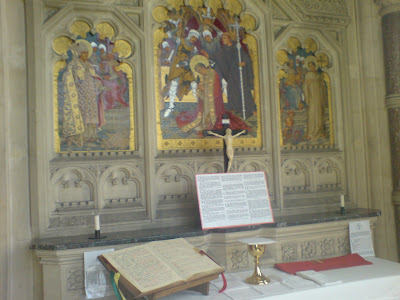 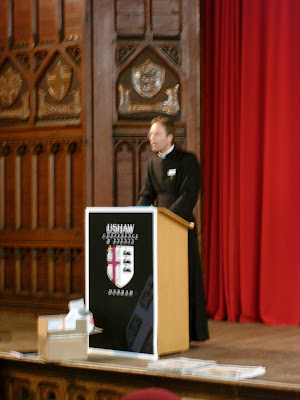 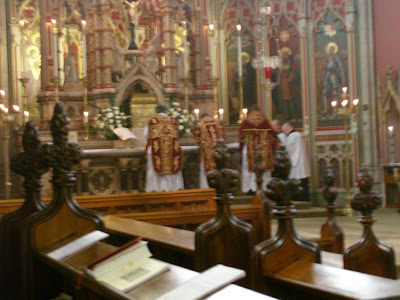 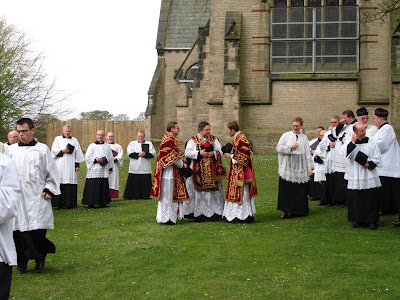 I had the privilege today of attending Solemn Mass for the Feast of St George at Ushaw Seminary and it proved to be an uplifting spiritual experience for me.

The antique vestments, polished performance of the choir and organ, made this a memorable Mass.
It's heartening that 21 priests have put themselves forward to learn how to celebrate the Traditional Latin Mass.

The Latin Mass Society really does deserve our gratitude for organising this training conference.

A privilege indeed. I was able to attend Mass each day and would have loved to have been able to get to Vespers and Benediction too - maybe next year. What a setting! Everything was wonderful!
Thank you to all the priests who attended and to the organisers

I left Ushaw in June 1963 "re infecta". I was privileged to be present on Tuesday and Thursday at two of the Masses. It was as if the intervening 46 years had never happened. St Cuthbert's Chapel was built for ritual, for superb music, for splendour and for dignified and devotional spiritual experiences. The emotional reaction of the congregation was tangible.
I make no comment on the following quote from my June 1979 edition of the Ushaw Magazine.

"The College went into retreat following the Carol Service and during this week the highlight liturgically was an Advent Vigil Mass, which was held in one of the larger rooms in the college. It was an optional extra, but was well attended by the students. The Mass had an extended Penitential Rite and Liturgy of the Word, which incorporated the use of slides and piped music."

It would have been nice to have had an appearance from the Diocesan Rep from the LMS at some stage...

I am an ex-student of Ushaw and attended the LMS Conference in Merton last year. The best thing about holding the Conference at Ushaw is that there is reservation of the Blessed Sacrament which I missed at Merton, and that there are enough altars for private Masses and no therefore no need to be bussed out to other venues. It also has ample parking space making direct driving to the venue possible. I'm only sorry I wasn't able to be there this week.

Ah, Father! What joy!
Such a delight to behold!

I see that the cjw wreckovation of the 80's has been partly undone - Our Lady is no longer being held prisoner behind railings placed across the sanctuary.

Having been subjected to Ushaw's 'formation' and the accompanying prohibitions on wearing a cassock, or a dalmatic with the standard-issue polyester anorak alb at weekday Mass, the use of a wooden plate stand for Exposition of the Blessed Sacrament and various other liturgical lunacies and abuses that in some of the professorial minds became a 'formation issue' should one even appear to be disturbed by them, I was in danger of shedding a tear when I saw these pictures of St Cuthbert's being used for what is was built for.

Though one does have to admit that the more 'gothic' style of vestments are more suited to that environment, but that is only an iota.

I really must apply myself to learning sufficient Latin to make a reasonable attempt at the EF.

Fr Dickson, sorry that you couldn`t make the conference but hope you will next year.

Ushaw Survivor, thanks for your post. I remember all too well the regime of the 1980`s at Ushaw and what you mention. I only hope things have improved. Having been through Ushaw at that time made it all the more powerful an experience. I hope you might come next year and see it at first hand.
I know what you mean about Gothic vestments but I suppose I prefer Roman and those of Luzar outshone even what Ushaw has tucked away.

Anonymous, I agree. There was a place with his name set at the high table for the big dinner on the last night.

What a fabulous week indeed. So much to take in and enjoy each and every day, if not each and every hour.I must say that I would never see this happen in England - a sacristy full of priests vesting for Mass,an always busy and outstandingly efficient father - sacristan, without whom we would probably have been totally lost in a maze of corridors, chapels and altars, quite a few altar servers ready from 6:30 - 7 in the morning and vestments set out on the table. A joy to behold. And the sight of two priests saying the Masses at neighbouring altars - beautiful. Lauds and Vespers with our little schola were a unique experience in its own right, and all that in quiet surroundings of a seminary. Not to mention the opportunities for meeting and mixing with like minded people for a few days. I will never forget this week and very much look forward to next conference at Ushaw. And we've got to do this again, it has been a huge success.

Anonymous said: ‘It would have been nice to have had an appearance from the Diocesan Rep from the LMS at some stage…’ It was nice of him to say that! At least I shall read it that way. Seriously, though, I feel no need to respond to people who are content to hide behind a pseudonym when making personal remarks.
Fr Brown, yes, there may well have been a place name set for me. To date, no one has yet asked me if there was a reason for my absence; ‘were you unwell?’ had you other reasons which prevented you being there?’ Perhaps people make remarks without first thinking, of course, but thinking is not a bad thing to do at times. The euphoria over Ushaw perhaps made others forget that family can, and must, come before anything else.

What a beautiful chapel, Father, gorgeous vestments and all matching and all that incense. It looks breathtaking.

Father Brown, you were thrilled by the Ushaw sacristy bustling with priests preparing for Mass. As I recall, this was the way it was everyday during my time at Ushaw, from 1946 to 1959. This is how it was:- 6.15 am the rising bell sounded throughout the College (the Junior House, ages 11 to 13 rose at 7.15 am). All profs (ie priest teachers) and students had to be in St Cuthbert's Chapel by 6.45 for meditation. Unless you were serving Mass - then you had to be in the sacristy, vested and waiting by 6.45 for the first batch of profs to say Mass, you assisted him in vesting, led him to the designated altar (Woe betide you if you took him to the wrong altar!), you served his Mass and led him back to the sacristy, which by this time was filling with more servers and profs for the second batch of profs who would then say their Masses. Meanwhile at 7.15 the main Mass for the rest of the students who had been in the Chapel all this time would begin. This was almost always a Low Mass and finished in time for breakfast at 8.am. On Sundays, there was always a Solemn High Mass at 10.30, and Solemn Vespers or Compline with Benediction at 3 pm.
In those days none of this was exceptional - we took it for granted and never thought that it would ever change! Last week we helped in a small way to bring it back!

Thank you Father for your account of what Ushaw life was like. I can well imagine that everyone thought it would last for ever. When I had my diaconate interview, Canon Walton,the president, told me that in the late 50`s there were people who were pushing for a vernacular liturgy but they were regarded as cranks.
Last week was a vision of heaven!