So I spent a week in Tuscany in the company of Frs Zielinski and Donaghue. We used to be parish priests of neighbouring parishes in Gateshead and would have Sunday lunch together occasionally. Now we are more scattered but still meet up now and again for lunch and generally have good conversations. To put us in rather crude pigeon-holes I would say Fr Z is a conservative, Fr D a liberal and I`m traditionalist. So I find myself sometimes agreeing with one and then with the other. Naturally much time was spent discussing the diocese and the priestly life.
We visited Siena, San Gimignano, Monteriggione, Volterra, Colle di Val d`Elsa. The food was the best I`ve had in Italy and of course the wine was marvellous being in the heart of Chianti-shire.
From an ecclesiastical point of view there were some matters of interest. Not far from where we stayed was a sanctuary of Our Lady of Mount Carmel. We called to have a look around and greeted the sister who was in the church only to find that the community of six sisters were all Australians! They had come over twenty-six years ago at the request of the archbishop of Florence. We went back for Sunday Mass which was celebrated as a Mass of St Therese after which children distributed roses to all present.
Also nearby was the village of San Donato. Here`s the interior of the parish church. I was most intrigued by the lack of a forward facing altar and the presence of altar cards! 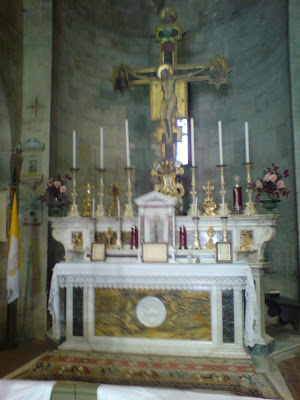 On exploring the internet just now I found the following on this site:


So it wasn`t an accident! We did get a glimpse of the young parish priest in his cassock. I wish I had done a search before going. Tuscany seeems to be well-supplied with the Extraordinary form.

So that was that. The journey back was much less eventful than the one out I`m glad to say. One more recent event to go!
Posted by Fr Michael Brown at 11:17 am

I have a good friend; she cried all day when Cardinal Ratzinger became pope and I celebrated all day. To keep the friendship there are so many issues we avoid. Is it the same with your priest friends?

I fell off the sofa onto the floor crying with laughter.

We didn`t really avoid any issues but Fr Donaghue did wonder at one stage what was the point of discussing things since none of us were going to change our views by listening to the others! We all got on very well however and had a good break.