At last I have found time to get back to writing up this blog. I have been away and busy in between. However it all started on September 24th. Many thanks for the birthday greetings. It was the day I was due to fly off on holiday with Frs Zielinski and Donaghue for a week in Tuscany. This holiday had been planned in August 2007. I don`t normally operate like this but when Frs Z and D asked me if I had plans for September 2008 I had to say I didn`t and so it was planned. However for quite a while now I have known that the director of the Schola Gregoriana of Northumbria, Ian Graham, was hoping to be appointed as a circuit judge somewhere in England. As luck would have it, after he learnt that he had been successful, he learnt that his swearing-in would be in London on September 24th. So it was arranged that I would change my plans for getting to Florence airport and catch up with the other two in Tuscany, arriving a few hours after them.
So I caught the London train. It was late. There had been a body on the line at Darlington but that was cleared by the time we got there but the train still managed to break down twice. It left me with 15 minutes to get from Kings Cross to Chancery Lane. The taxi driver told me that there had been an accident and traffic was slow. However I got there, with all my luggage, only five minutes late.
The swearing-in took place at the Royal Courts of Justice. Ian was vested in his judicial gear at Ede and Ravenscroft and set out to walk round the corner to the Courts, turning a few heads with his outfit as he did. The Lord Chief Justice duly appeared in an even more flamboyant outfit, heard the swearing-in and after this we went for lunch.
So farewell then Ian Graham...
Ian made a huge contribution to music for the TLM in the North East, mainly through founding the SGoN. When I first met Ian he was involved with the music at the Station Hotel Mass said by Dr Glover. I always knew that if he was organising the music for any event he could be relied on to do so in a professional way. Ian is intending to pay occasional return visits to Tyneside. Peter Locke has stepped into his shoes as Schola Director and took the reins for the first time at Longbenton on Sunday night where the congregation had rocketed to being 30 strong.
Here is His Honour Judge Graham after his swearing in. Note the gloves which are never worn but carried in the `non-dominant hand`. 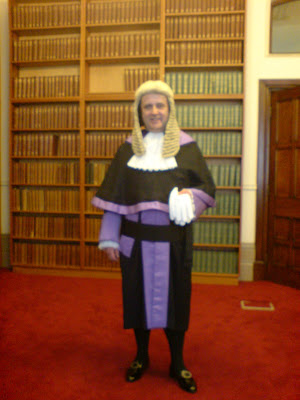 Here`s one with me too: 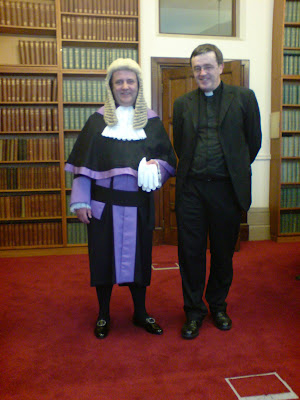 I did get to Florence successfully and ended my birthday by being ripped off by a Comune di Firenze taxi driver who managed to make a 14 kilometer journey, which I was expecting to cost 50 Euros, cost 115 as he said the motorway was closed. Next time I`ll ask for a fixed price but it was 11pm when my flight arrived and I never thought I would have that kind of problem as it`s never happened to me before.

Best wishes to Ian in his new job.

Now what would be an interesting excercise is to compare the dress of prelates in the seventeenth and eighteenth centuries with what His Honour is wearing. Buckled shoes too!

Rubricarius, I hope you will enlighten us!

The shoes, I was told, are `court pumps` and are padded inside as they can be difficult to keep on otherwise.

Thank you, Father, for your kind words.

It was a splendid day and the full ceremonial dress of a circuit judge is quite a complicated matter. I was grateful for the assistance and expertise of Mr Simms of Ede and Ravenscroft.

Perhaps Rubricarius can tell us when bishops in England last wore wigs. I still wear the short court wig (not the full-bottomed wig in the photos) every day in court!

Alas, my comment was really rhetorical and I don't have an answer but it would be interesting to find out. My educated guess would be that His Honour's dress and those of a prelate would be rather similar (e.g. His Honour appears to be wearing something not dissimilar to a mozzeta) Prelatial dress shares a common ancestery with that of academia and the judiciary.

The shade of violet particularly struck me. When I was at Maynooth a couple of months ago it was interesting to look at the portraits of Episcopal alumni: the shade of violet they were wearing was the same as that on His Honour's robe. Late in nineteenth century the portraits showed a shift to a much redder 'fuschia' shade with which we are familiar today.

I understand that Judicial dress also changes with the season as did prelatial dress until relatively modern times. I am sure Mr. Simms would be a mine of fascinating information.

Again, an educated guess would be that prelates were wearing wigs into the early nineteenth century.