Some better news: extraordinary form may also be celebrated "even if it is not specifically asked for or requested".

This article from the NLM blog cheered me somewhat after the news about Holy Days, especially the Cardinal`s declaration that the Holy Father wants the Extraordinary Form to become a normal part of parish life. I hope this DVD becomes available in the UK too.
As for the assertion that the EF may be said even if not asked for, then I can imagine some responding by saying `Of course. The Motu Proprio allows any priest to say a private Mass` but this doesn`t seem to be what the Cardinal is saying as he goes on to say that priests should make it available so that everyone may have access to this treasure of the ancient liturgy of the Church. The long-awaited document of clarification from the Ecclesia Dei commission should be an interesting read.


As noted in the post on the new FSSP and EWTN training DVD for the usus antiquior, this DVD also contains an introduction by Cardinal Darío Castrillón Hoyos, President of the Pontifical Commission Ecclesia Dei, which can be viewed online here. 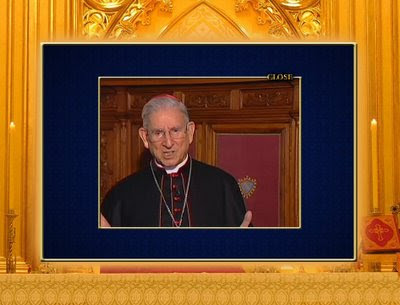 Provided that the translation is accurate (it is almost impossible to make out what the cardinal is actually saying in Italian under the voiceover), His Eminence is making some important assertions in this statement. While these are obviously not legally binding, they are still significant considering the cardinal's position, and may give a hint at some of the contents of the forthcoming clarifications by His Eminence's commission on the motu proprio Summorum Pontificum.

The first interesting point the cardinal makes - which was of course already obvious from Pope Benedicts accompanying letter, but is consistently being downplayed by opponents of the extraordinary form - is that that the use of the 1962 missal is a gift not only for so-called traditionalists, but "for the whole Catholic Church".

The second - and here the accuracy of the translation is especially important - is that Cardinal Castrillón says that if there are faithful requesting the older form of the Mass from priests, they, by the will of the Vicar of Christ, must accept the petitions".

The third point I want to note, and possibly the most important one, is that His Eminence says that the extraordinary form may also be celebrated "even if it is not specifically asked for or requested". This supports the interpretation advanced by Fr Tim Finigan and many others, which in my opinion is the unequivocal result of applying the normal methods of legal interpretation. An interpretation, however, which is contested by opponents of the usus antiquior, and the contrary of which (i.e. a requirement that the forma extraordinaria only be said if a group of faithful requests it) is expressly contained in many guidelines by bishops or entire bishops' conferences. Cardinal Castrillón even goes farther by asserting that in such cases where there are no specific requests by faithful, nevertheless the priests "should make it available so that everyone may have access to this treasure of the ancient liturgy of the Church".

This leads to the last point I would like to highlight which is His Eminence's declaration that "the Holy Father wants this form of the Mass to become a normal one in the parishes".A very welcome message from His Eminence indeed.

Here is a transcript I made of the entire passage of the introduction by Cardinal Darío Castrillón Hoyos:


It [the older form of the Mass] is not a gift merely for the so-called traditionalists, no, it is a gift for the whole Catholic Church.

And because it is a gift freely offered that the Holy Father is making, he makes it by means of this marvelous structure, the Church, which comprises the parishes, the priests, and the chaplains in the chapels where the Eucharist is celebrated. And they, by the will of the Vicar of Christ, must accept the petitions and the requests of the faithful who want this Mass, and they must offer it to them. And even if it is not specifically asked for or requested, they should make it available so that everyone may have access to this treasure of the ancient liturgy of the Church. This is the primordial goal of the motu proprio, a spiritual and theological richness.

The Holy Father wants this form of the Mass to become a normal one in the parishes, so that in this way young communities can also become familiar with this rite.
Posted by Fr Michael Brown at 9:19 am

Mass for Ascension Thursday was well attended at the church I went to. Maybe we could convince the new Bishop to reinstate these holy days just for our diocese, can he do that? He should be able to.

Just seen this on BBC online:

I particularly liked this quote from the Pope's latinist, "[Latin's] not like French and some of these philosophical languages where you can write a whole page and say nothing - in Latin you can't do that!".