Last week I was away in Rome at the annual conference of the Canon Law Society of Great Britain and Ireland. This being the 50th anniversary of the Society the meeting was held at Rome in the Casa La Salle. This was an impressive building with a very attractive church which seemed to be built to accomodate hundreds of De La Salle brothers. Here is a shot of the nave. The large figure on the back wall is that of St Jean Baptiste de la Salle. However liturgical madness had broken out on the sanctuary. Just when you think you`ve seen it all this happens. It didn`t look so bad when the seats were being used. However it was comfortable and as we know that is what liturgy should be above all else. We carpet out churches to make them `comfortable` so I suppose the next logical step is to introduce armchairs. 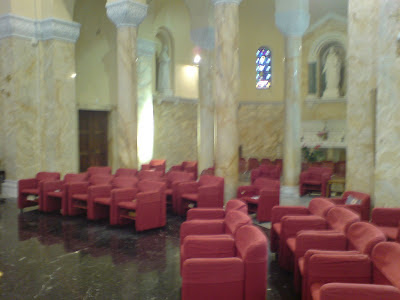 In the background of the above shot you can see one of the fine side altars all of which had a reliquary of a saint or blessed of the de la Salle brothers. I had gone to the conference hoping to be able to use the new found freedom to celebrate the Extraordinary Form. A number of other priests at the conference had the same idea. I took a small altar missal and altar cards but another priest had even brought vestments. In the event, although the Canon Law Society were helpful, I never tried it. I wanted to hear what the celebrants at the main conference Masses had to say. On the first day we had Cardinal Arinze as main celebrant and preacher. He mentioned the problem of liturgical abuse but added, tongue in cheek, that of course it doesn`t happen in Britain or Ireland: I imagine he was recalling the response to the 1997 Vatican document On certain questions regarding the collaboration of the non-ordained faithful in the sacred ministry of priest where a certain senior English bishop announced that the document did not apply in England of course. Here`s a picture from that Mass. 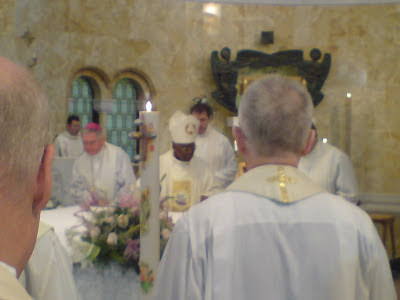 At the other two Masses we had Archbishop Stankiewicz, Dean of the Roman Rota and Cardinal Foley Grand Master of the Equestrian Order of the Holy Sepulchre of Jerusalem. On Wednesday we attended the papal audience where the Patriarch of the Armenian Apostolic Church addressed the Pope. I did manage to slip into Gammarelli`s to buy a plain white silk Roman vestment from their curiously small selection of available vestments. Business must be good however. When Fr Zielinksi asked how long it would take for them to make a gilet he was told between one year and fourteen months! The last time I went with a priest who asked the same question it was only a six month wait. However it is true what they say: Rome`s vestment shops are latching on to the liturgical style of Pope Benedict and almost all now have some form of Roman vestment to sell or more traditional Gothic style vestments too.

Posted by Fr Michael Brown at 9:30 am

Ignore my requests for ad orientem, Father, we need a liturgical sofa!

Why not go all the way and just install beds for people to snooze on.

Welcome back Father by the way.

Looks as thought someone should be selling popcorn and ice creams during an interval.

Never mind the armchairs, I think it is rather sad for a concelebrant to be taking photographs during Mass.

Well I didn`t use flash and no-one was saying anything at the time I took the picture: it wasn`t during the Eucharistic prayer or offertory. Would you be less sad if someone in the congregation had taken a picture?