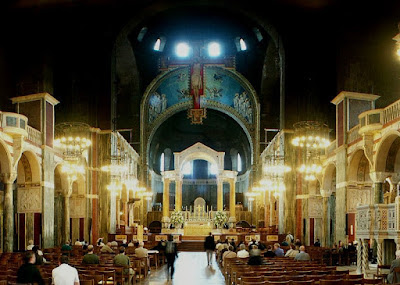 I received this very good news today from the LMS. What a marvellous event this will be and a clear signal that the Extraordinary Form is here to stay.

The Latin Mass Society is proud to announce that Cardinal Dario Castrillon Hoyos, President of the Ecclesia Dei Commission in Rome and Prefect Emeritus of the Congregation for the Clergy, has accepted its invitation to celebrate a Pontifical High Mass in the Traditional Latin Rite (the Extraordinary Form) in Westminster Cathedral on Saturday 14 June at 2.00 pm.

Cardinal Castrillon Hoyos is one of Pope Benedict XVI’s closest collaborators and is charged with oversight of the Vatican’s relations with the religious communities and laity committed to the Extraordinary Form of the Roman Rite.

Cardinal Castrillon Hoyos will arrive in London on Friday 13 June in time to attend a private dinner given in his honour by Mr Julian Chadwick, Chairman of the LMS.

As befits a Prince of the Church, Cardinal Castrillon Hoyos will be welcomed at the Cathedral west door in full cappa magna before processing to the Blessed Sacrament Chapel to pray; he will then vest in the sanctuary whilst the Cathedral choir sings. Pontifical High Mass will then be celebrated at the High Altar with all the breathtaking ceremony and music integral to the Traditional Rite. Cardinal Castrillon Hoyos will also preach.

Julian Chadwick, Chairman of the LMS, said, “This is the highlight of the LMS’s 43 years of struggle on behalf of the Traditional Latin Rite. It will be the first time since the liturgical changes of 1969 that a Cardinal will have celebrated the Extraordinary Form in Westminster Cathedral [Note: Cardinal Alfons Stickler, Vatican Librarian Emeritus who died in December last year, presided at a High Mass in the Cathedral organised by the LMS in 1992 but did not celebrate]. Cardinal Castrillon Hoyos has been unstinting in his work on behalf of the Extraordinary Form and this Mass is a clear signal from Rome that it wants the Traditional Rite reinserted into the heart of the Church’s liturgical activity. We are extremely grateful to Cardinal Cormac Murphy-O’Connor for readily agreeing to this Mass and to Mgr Mark Langham, the Cathedral Administrator, and all his staff for their help with all the arrangements. This Mass literally represents the prayers of many thousands of LMS members and supporters offered up through the years and now come true.”

Now there's an idea for a parish outing!

Look out for the official photos at http://www.traditionalcatholic.org.uk very soon after the event.