Yesterday I was mostly dancing with Zulus. Part of a parish priest`s everyday duties: the Lions of Zululand came to do a dance display for our primary school and at the end they dragged members of the audience up to dance with them: the headteacher was first and I, an obvious target, was next.

Tonight we had a St Patrick`s Day celebration in the parish hall. This was to raise money for young people trying to get the funds together to go to World Youth Day with the Pope in Australia later this year.


However this year with an early Easter St Patrick doesn`t crop up on the English liturgical calendar. When I was trying to get help for our penance service on Monday night at the deanery meeting one of our Irish priests said " You know what night that is" and I replied that it was normally St Patrick`s night but not this year. I believe that the annual St Patrick`s Mass at St Michael`s Newcastle was held this morning. (Not sure what happened to St Joseph there.)

Problems started this morning at the weekly EF Mass in the parish. I got to the altar , put the chalice down and looked at the missal when I realised I was in purple vestments and today was (I think: at least according to the diocesan ordo: the LMS ordo said not) St Joseph`s day. So off we went back to the sacristy to change vestments.


Then I got an email asking what has happened to St Cuthbert`s day this year? Normally this is on March 20th but that is Maundy Thursday this year. The diocesan ordo has transferred the Annunciation to March 31st but no mention of St Cuthbert. The rest of the country now has St Cuthbert on September 4th to give them a chance to celebrate him as he is not a solemnity in elsewhere but we have kept March 20th (and also have September 4th for the feast of his translation). As there is no mention of the feast in the ordo I`ll have a Mass of St Cuthbert on the earliest possible date which is April 1st.


In the meantime here is a picture of the band for tonight`s St Patrick`s night do. 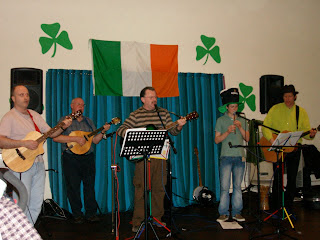 The anticipation of St. Joseph's feast day is a result of a decision of the CDW printed in Notitiae in 2006. Quite how this extends to the 1962 missal, which according to SP retains its calendar, is puzzling.

Both the LMS Ordo and the traditional Ordo both have St. Joseph transferred to April 1st. With regard to St. Cuthbert I would expect his feast to be a double of the first class with octave. I would suggest that his feast, without octave, would have been transferred too until Low Week.

Thanks Old Believer, that`s interesting. I puzzled over this one. As the bishops had moved the feast of St Joseph to Saturday, I thought it best to go with that as I didn`t think the LMS ordo had the authority to move feasts.

Yes, I read the ruling from Rome on the transfer of the Feast of St.Joseph.

I understand a number of priests seem to be following the LMS ordo, and are celebrating the transferred Feast (using the 1962 Missal) on 1st April this year.