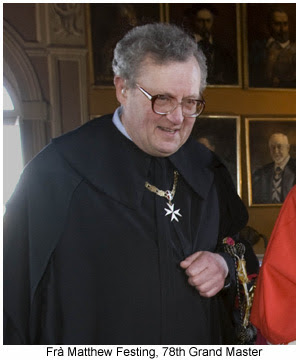 I was delighted to read yesterday on Holy Smoke that Fra Matthew Festing has been elected as the new Grand Master of the knights of Malta. Fra Matthew lives in Northumberland and so not only succeeds the previous Grand Master Fra Andrew Bertie as only the second Englishman to be appointed to this position but he is also the second person from this diocese to hold it as Andrew Bertie was from Hexham. Fra Matthew is well known in this diocese through his work for Sotheby`s.
What with Leo Darroch as head of International Federation Una Voce and now Fra Matthew as head of the Knights of Malta, Hexham and Newcastle is doing well in high places in the universal Church!
Here is the news as announced on the Knights` website. For background on who the Knights of Malta are click here.
Frà Matthew Festing Elected Grand Master
Rome, 11 March 2008
Frà Matthew Festing, 58, an Englishman, becomes the 79th Grand Master of the Sovereign Military Hospitaller Order of St John of Jerusalem of Rhodes and of Malta, elected this morning by the Council Complete of State (the Order's electoral body). In accepting the role, the new Grand Master swore his Oath before the Cardinal Patronus of the Order, Cardinal Pio Laghi, and the electoral body. He succeeds Frà Andrew Bertie, 78th Grand Master (1988-2008), who died on 7 February.
The new Grand Master affirms his resolve to continue the great work carried out by his predecessor. Fra' Matthew comes with a wide range of experience in Order affairs. He has been the Grand Prior of England since the Priory's re-establishment in 1993, restored after an abeyance of 450 years. In this capacity, he has led missions of humanitarian aid to Kosovo, Serbia and Croatia after the recent disturbances in those countries, and with a large delegation from Britain he attends the Order's annual pilgrimage to Lourdes with handicapped pilgrims.
Educated at Ampleforth and St. John's College Cambridge, where he read history, Frà Matthew, an art expert, has for most of his professional life worked at an international art auction house. As a child he lived in Egypt and Singapore, where his father, Field Marshal Sir Francis Festing, Chief of the Imperial General Staff, had earlier postings. His mother was a member of the recusant Riddells of Swinburne Castle who suffered for their faith in penal times. He is also descended from Sir Adrian Fortescue, a knight of Malta, who was martyred in 1539.
Frà Matthew served in the Grenadier Guards and holds the rank of colonel in the Territorial Army. He was appointed OBE (Officer of the Order of the British Empire) by the Queen and has served as her Deputy Lieutenant in the county of Northumberland for a number of years.
In 1977 Frà Matthew became a member of the Order of Malta, taking solemn religious vows in 1991.
As well as his passion for the decorative arts and for history, for which his encyclopaedic knowledge of the history of the Order is legendary, as is his very British sense of humour, Frà Matthew spends any free time possible in his beloved Northumberland countryside.
Posted by Fr Michael Brown at 1:34 pm