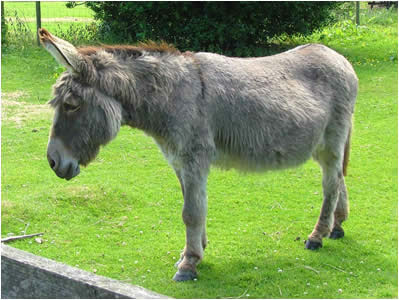 Listeners to the Today programme on BBC Radio 4 may have heard this morning the story of the 13th century law which is holding back the opening of a market. It is also reported on the BBC website today.
.
South Shields was granted permission by royal charter of King John to have a market and for there to be no rival market within the distance of a day`s donkey ride. The town of North Shields on the opposite bank of the Tyne is thus prohibited from having a market but now it seems they want one but can`t get around the 13th century law which South Shields has threatened to invoke through the South Tyneside Council if they try.
.
Apparently it`s all very serious.

I heard a spokeswoman on the radio say that the law was outdated because the travelling distance between the two towns was about 14 miles, which she seemed to suggest was too far for a donkey to walk in a day. Well, I am prepared to say that a 14 mile walk should be well within the capability of any reasonably fit donkey, and carrying a pack or a light person to boot.

It is only 14 miles because there is no bridge over the river between the two towns. However there is now the Tyne tunnel at that end of the river. Interesting to know that a donkey can in fact cover 14 miles in a day.

I know a bit about equines and would agree with Sweep.
I see on the website they're saying it's a much shorter journey so presumably the 14 miles is the return trip, in which case Neddy can do it which is bad news for North Shields. I don't think a donkey would like the Tyne Tunnel.
It's a sweet donkey in the picture, by the way.

The law is an ass!

(So glad to be the first with that one!)