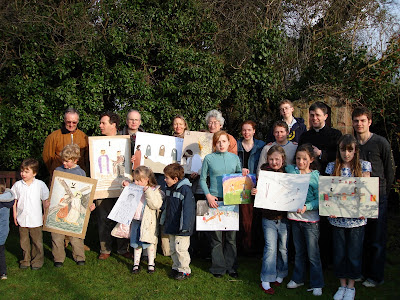 On Sunday a number of families from the Catholic Families Association came to St Mary`s for a Family Day. I have been involved with the Association since 1992. I used to find the newspaper for the National Association of Catholic Families in the snug of the English College and think that when I got back to the diocese I would like to be involved with this apostolate. I was delighted to find that there was a branch in the diocese and have been involved ever since and may even be honorary chaplain. Last summer I was delighted to be asked to celebrate the wedding of the daughter of one of our families. The Association seeks to live by the teaching of Pope John Paul II in the document Familiaris Consortio and provides support for Catholic families seeking to be faithful to the Church`s teaching on family life. This Sunday we only had a small number but recent meetings have seen much larger gatherings.

This time I spoke to the 7-11 year olds about confession. The children were quick to turn the session into a series of difficult moral quandaries about where to apportion blame in certain circumstances! I was assisted by Dorothy our organist who had stayed on after Mass to play for Benediction. Dorothy gave the children a short introduction to Gregorian chant and we had a run through of the Adoremus for Benediction.

The picture above shows the families and the children are holding the pictures the youngest had coloured in for the Station which took place in the garden with different families each taking a station.
Posted by Fr Michael Brown at 10:44 am