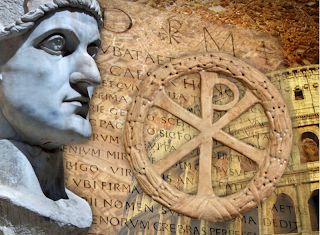 There are quite a number of anniversaries occuring in 2013. There has been a lot about the bi-centenaries of the births of Wagner and Verdi. Also the publication of Pride and Prejudice was in 1813. 1913 saw the first performance of Stravinsky`s Rite of Spring. However I have seen very little to mark the Edict of Milan in 313 which granted freedom to Christians. It appears the Serbian Orthodox are celebrating and this even drew a comment from the papal nuncio to Serbia but I`ve not noticed much else.

I only thought about it recently, when the local Methodist magazine came through my letter box and I was surprised to see the front cover given over to the Edict of Milan, and am now thinking it may be worth trying to have a Solemn High Mass to mark the occasion given that we can`t always take freedom for granted.  Before anyone is tempted to say the conversion of Constantine was a disaster for the Church let`s just say that that was not how it seemed to Christians at the time.

This from Eusebius` Life of Constantine:

Chapter XV.—How Constantine entertained the Bishops on the Occasion of His Vicennalia.
About this time he completed the twentieth year of his reign.3251 On this occasion public festivals were celebrated by the people of the provinces generally, but the emperor himself invited and feasted with those ministers of God 524whom he had reconciled, and thus offered as it were through them a suitable sacrifice to God. Not one of the bishops was wanting at the imperial banquet,3252 the circumstances of which were splendid beyond description. Detachments of the body-guard and other troops surrounded the entrance of the palace with drawn swords, and through the midst of these the men of God proceeded without fear into the innermost of the imperial apartments, in which some were the emperor’s own companions at table, while others reclined on couches arranged on either side.3253 One might have thought that a picture of Christ’s kingdom was thus shadowed forth, and a dream rather than reality.
Posted by Fr Michael Brown at 11:12 am

We may have to undergo a couple of centuries of state persecution again, before we arrive at the situation of the Edict of Milan.

Patricius said...
This comment has been removed by the author.
12:03 pm

I agree Christian freedom is endangered at the minute. However I don`t think `sick perverts` is accepatble language given the Catechism`s (2358)request for `respect, compassion and sensitivity` to homosexuals. There is no point in being uncivil.

Indeed Father, the Edict of Milan must have been very welcome and a relief to the Church at the time.

However, given what resulted in the next 1600+ years with the Church’s immersion in secular matters, one has to view it as a ‘mixed blessing’ in retrospect.

The only thing endangering Christian freedom in countries like the UK is the tepidity of Christians. Nothing can touch us (Rom 8,35) as long as the faithful have recourse to the sacraments. Freely. Which we already don't have because the lack of faith has resulted in lack of vocations to the priesthood (and because administering the sacraments being the most important aspect of priesthood seems to have disappeared from pastoral theology). The Edict of Milan gave the Church the freedom to nurture the spiritual life of the faithful via the sacraments. Celebrating Mass to mark the occasion sounds a wonderful idea, Fr.

Father. I can't believe you said that.

"(2358)request for `respect, compassion and sensitivity` to homosexuals."

I mean you're being sarcastic right?

Sorry, this does bug me and I see "compassion" to homosexuals as showing them the path to chastity and heterosexuality. I read this phrase enough times on Terence Weldon's blog as it being some sort of motto. I just worry it will be thrown back at pious Catholics.

Of course, no one wants to have rude remarks thrown at them, but some gays are unsympathetic to the Catholic view point (or should I say Trad Catholic viewpoint?)regarding homosexuality.

Damask Rose all I meant was that I don`t think name-calling by either side (cf `bigot of the year`)gets us very far. I don`t know Terence Weldon`s blog and wasn`t aware he uses the catechism phrase as a mantra. I was just quotnig it becuase it`s what the catechism says.

Constantine certainly made things different and, at the time, certainly better for Christians. The down side was the process of Christianity becoming state religion and the ensuing power struggles of which party had the upper hand, church or state. That power battle has continued ever since the fourth century.