Press Releases from the diocese of Shrewsbury and the LMS 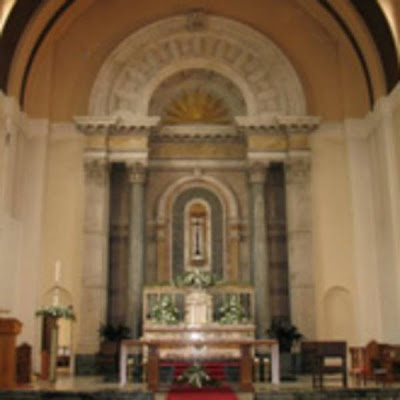 Further to yesterday`s story about New Brighton I see there is a press release from the diocese of Shrewsbury (H/t to Joseph Shaw). I wonder what the brother northern Catholic bishops had to say? However it looks like it is a serious proposal. For those who commented on the last post about the amount of work that needs done on the church, repairing ailing churches has become a speciality of the Institute and I`m sure they will be prepared to put in whatever work is needed for its restoration.


Press Release from the Diocese of Shrewsbury

The Rt. Rev Mark Davies, the Roman Catholic Bishop of Shrewsbury , has entered into exploratory negotiations with the Institute of Christ the King Sovereign Priest about the possibility of the religious order establishing a community of priests at the Church of Ss Peter and Paul, New Brighton .
The intention is to reopen the main body of the church, which was closed for worship in August 2008, by conferring on the Institute the specific mission of fostering Eucharistic adoration. It is hoped that the Institute will work with local Catholics for the restoration and reopening of the building.

Priests of the Institute of Christ the King celebrate Mass in the Extraordinary Form of the Roman Rite (sometimes known as the Tridentine rite, the Traditional Latin Mass or Old Latin Mass) according to the liturgical books promulgated in 1962 by Blessed Pope John XXIII. Bishop Davies will also be considering pastoral provision for the ordinary form of the Mass in English.
After Easter, Monsignor Gilles Wach, the French founder and superior general of the Institute, will visit the church for the first time and will hold direct talks with the bishop. If negotiations are fruitful Ss Peter and Paul will be the first Catholic church in Britain to be run by the Institute.

Since Bishop Davies was first approached by the Institute last year, he has been consulting with the Holy See, his brother northern Catholic bishops, the Patrimony Committee of the Catholic Bishops’ Conference of England and Wales , and English Heritage about the future of the Church of Ss Peter and Paul.

Bishop Davies said: “I welcome the interest shown by the Institute of Christ the King in establishing a new foundation in the Diocese and working for the restoration of the Church of Ss Peter and Paul, New Brighton . I look forward to exploring the practicalities of such a foundation providing Mass for the faithful attached to the Extraordinary Form and the possibility of the church becoming a centre for the adoration of the Blessed Sacrament in which all can share. ”

Canon William Hudson, a spokesman for the Institute of Christ the King, said: “We are in the process of discussing this with Bishop Davies. It is a very serious proposition and while there are a number of issues that need to be addressed - notably financial - we are sure that the faithful will be just as generous as when the church was built. Our order has considerable experience in re-opening churches in very similar circumstances to Ss Peter and Paul. I am confident that with the guidance of the bishop, a solution can be found to the benefit of the Catholic community at large.”

Please contact Simon Caldwell, communications officer for the Diocese of Shrewsbury, on 07708 119554 or at gabrielnews@btinternet.com.
Photos of Bishop Davies are available at:
http://www.flickr.com/photos/catholicism/sets/72157623368061861/

There is also today a press release from the LMS

In response, the Latin Mass Society has announced that it warmly welcomes the news that Bishop Mark Davies is negotiating with the Institute of Christ the King Sovereign Priest (ICKSP) to enable the ICKSP to assume responsibility for the much-loved Church of SS Peter and Paul on the Wirral and for it to become a centre for Eucharistic devotion. The local membership of the LMS has been campaigning for the church to be reopened and for the Traditional Latin Mass to be regularly celebrated there.

This initiative is sure to promote Church renewal in Shrewsbury diocese to the great benefit of all Catholics regardless of which Form of the Rite they are attached to. The LMS will offer every help and assistance to Bp Davies and the Institute to bring their plans to fruition and invites all those attached to the Extraordinary Form to pray for Bishop Davies’ intentions.
Doctor Joseph Shaw, LMS Chairman, said: ‘This initiative is a clear expression of the harmonious reintegration of the Extraordinary Form into the life of the Church which Pope Benedict XVI so patently desires. It is a wonderful idea to have a centre for Eucharistic devotion in Shrewsbury diocese and the ICKSP are second to none in their devotion to Our Blessed Lord in the Sacrament of the Altar’.
The LMS provides regular financial support both to the Institute of Christ the King (ICKSP) and the Fraternity of St Peter (FSSP) for their missions in England and Wales to reintroduce use of the Extraordinary Form; further financial support is given to English and Welsh seminarians at ICKSP and FSSP seminaries.”
--

This link goes to the LMS’s press release on its website:
http://www.lms.org.uk/news-and-events/news-blog#press-release-icksp-bp-davies