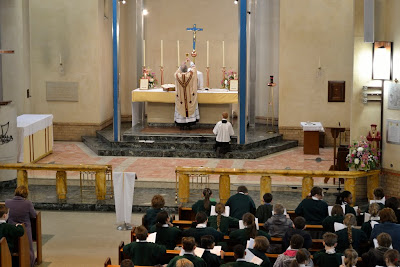 What an interesting idea! You can read about this Mass at West Heath, Birmingham on the Hermeneutic. I thought this was a useful thing to say:

It is important that all Catholics (and especially children) are aware of their heritage and the diversity which exists in the Church. All are welcome. Later in the year they will be visiting places associated with other Christian groups and other religions. These experiences help to promote understanding and prevent prejudice and bigotry, which can exist even among people who think of themselves as liberal or progressive in their thought

I have been celebrating school Masses for St Stephen`s school, Longbenton using the ad orientem position for the offertory, Eucharistic prayer and up to Communion time. It is a pity the school seems to have stopped using the plainchant they learnt. I was hoping to build on it not drop it. However this is an idea that has got me thinking but will need a lot of preparation.

UPDATE 7th March. I`ve loooked at Matthew Doyle`s site (picture above copied from his Flickr album) and see how the preparationwas done. It must help to have a teacher who attends the Extraordinary Form and a pupil who knows how to serve. The feedback from Melanie Bullivant, teacher at the Primary School and a regular at Fr George's Friday Evening Low Mass was interesting:

I was so pleased with the children's behaviour - they really seemed to enter into the spirit of the liturgy, so to speak! I have asked lots of the children what they thought of the Mass and there has been 90% positive feedback! A few said things like it was a bit loo long or they didn't like all the kneeling. But a hugh majority say they really liked it. I asked why and they said things like, they enjoyed listening to the Latin and they liked joining in with some of the reponses. Some said they liked the quiet because they felt close to Jesus and one girl said she really liked kneeling for Holy Communion because it was more special! One of the children said she wants to learn more Latin! Staff feedback has also been positive, they seemed to enjoy the Mass and were pleased with the children's behaviour.

I too saw that blog. It seems like an excellent opportunity. With a new 'Executive Head' of St Mary's & St Stephen's might this be a great time?
Let me know if we can help

Well, press on, Father. This could happen in 'your' school too.