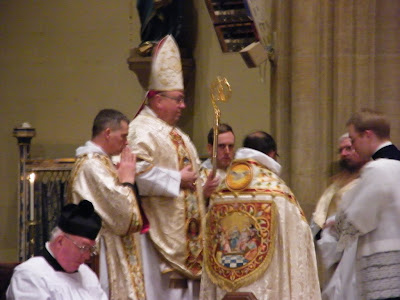 Readers may by now have seen the photos, by Mike Forbester, from the Pontifical High Mass at the Dominican Priory in Leicester for the feast of the Immaculate Conception. It appears to have been a terrific event. According to the reports there was a congregation of over 200. How annoying for the organisers that some of the altar candles appear to have gone out for key moments like the consecration. The bishop preached but I`ve not seen a copy of what he said as yet. After Mass there was the consecration of a new shrine to the English Martyrs. A reflection by the Prior of Leicester has been released for the occasion. It is well worth a read. I can only hope Fr Leon Pereira OP one day makes it to Newcastle`s Dominican house! Here it is.

The Martyrs of England and Wales are sometimes treated as an embarrassment. What they stood for is a reminder of less ‘ecumenical’ times. The temptation is to downplay their commemorations, and instead lump together all victims of religious persecution of the time, Catholic and Protestant, as the so-called ‘martyrs of the Reformation’, simultaneously congratulating ourselves that we have moved beyond such prejudice.

We can call such victims ‘martyrs’ only in an extended sense of the word. Properly speaking, the essence of martyrdom is not dying, but confessing the Truth. The Martyrs realised exactly where they stood. They saw what was at stake, and knew that friendship with God should not be lost at any price, even the price of a painful and gory death; even if conforming to the new state religion would spare their lives, and in some of their cases, earn them the honours and comforts of the world. The point of martyrdom is not death, but witnessing to or confessing the Catholic Faith. That is the meaning of the word ‘martyr’: a witness, a confessor.

This, the heart of martyrdom, is crucially important in our own time, when the Faith needs to be confessed with courage; when the shepherds of the Church must prize the care of their flock over the temptations they face: to be popular, to be loved, to be part of the established set, not to rock the boat. In this light we see what really matters about our Faith, and what is worth dying for. Not campaigns or agendas, but Christ Jesus and the Faith which is His gift, within the unity of the Church established by Him.
The English and Welsh Martyrs are a model of how the Church should function. In our day, ‘collaborative ministry’ is frequently a Trojan horse: tending to situations in the Church which simply cannot be, such as women priests; or to blur the distinction in identity and function between the clergy and laity. All of this is, of course, a massive betrayal of the Second Vatican Council. The Martyrs show us the true face of collaborative ministry: the laity died for sheltering priests – the clergy died for ministering to the laity. ‘Collaborative ministry’ which is unwilling to pay this ultimate price is not worthy of the name.

The Martyrs show us the role of conscience and the price of following theirs. Conscience is not about ‘feeling comfortable’ with one’s choices, but as the ‘aboriginal vicar of Christ’ (as Blessed John Henry Newman calls it), it must heed the Magisterium of the Church in order to be formed properly. In our time conscience is frequently invoked to justify dissent, especially on matters such as contraception (as though conscience were not involved in all our rational choices!).


Moreover we should not assume that the possession of an ‘untroubled conscience’ should never trouble us. A clear conscience should not be confused with a properly-formed conscience. Many of the English Martyrs invoked their conscience to account for their refusal to comply with the state’s injunctions. This is conscience as a challenge to self, rather than conscience as a justification of self. Rather than trivialising conscience, the Martyrs show its great dignity and seriousness.


The Martyrs do not simply inspire us; they aid us by their prayers. Their blood is the seed of Christians: of a Second Spring for England and the world. O white-robed army of Martyrs, pray for us! 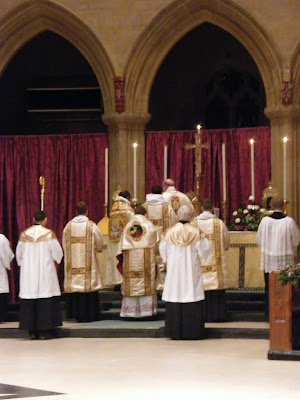 What a wonderful example to the rest of our hierarchy! Why do we hear of bishops saying that the cannot celebrate the EF of Mass prayerfully? How do they think it was celebrated for centuries? Were our pre Vat II priests not saying their Mass prayerfully? I don't think so!