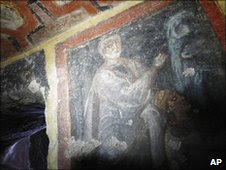 There is a story out today that the oldest known icons of Ss Peter and Paul, dating to the second half of the fourth century, have been found in a catacomb in Rome. I`m quite interested in this as following the Pantocrator at Longbenton, the plan is to have an Peter and Paul on either side of Christ. I hope we see a photo of both the saints in the newly-found icon soon
Posted by Fr Michael Brown at 6:52 pm