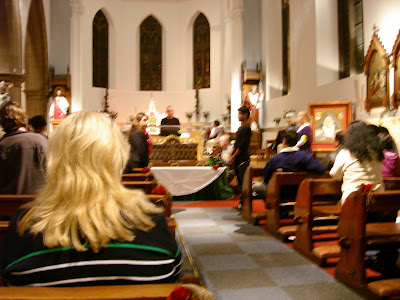 On Wednesday night I went down to St Andrew`s in Worswick St to visit the relics of St Thérèse. I got there at about 9.30 and found there was quite a long queue. However it kept moving and in all it was only about a fifteen minute wait to get in. By the time I left at about 10.15 there was no queue.

What I enjoyed most about the visit was that feeling that we are part of the universal Church: that these relics have been all over the world drawing Catholics to them in unity of faith. Sometimes in England it feels that we are going our own way and that developments in other parts of the Church don`t reach these shores. It has been mentioned recently that Cardinal Hume would not give permission for these relics to tour England while he was alive. I`d forgotten about that and remember being angry about it at the time. Maybe the cardinal who had worked hard to bring Catholicism into the mainstream of English life thought that if we were presented as a `bone-worshipping religion` to the outside world it would diminish his efforts. However there is no denying that the cult of relics has always been part of the Catholic faith although much eclipsed in recent times. Peter Brown`s book `The Cult of the Saints` I found quite exciting on this subject as he revealed the importance of the cult of relics in the early Church.

In the event it has been a good thing. It was encouraging to see so many people in St Andrew`s church and to see not just older people but a lot of younger ones too. I recognised a good few parishioners and a couple of attendees at the local SSPX church who sometimes come to the EF Masses in Longbenton. I wonder if many of the local SSPX followers went or whether they thought it was all tainted by being in a church where the OF is celebrated?

Above all it has made me revisit`The Story of a Soul` again and renew my acquaintance with the life of St Thérèse for which I`m grateful. Madame Evangelista has posted on her earlier visit that day. I spoke to one of our teachers today who had gone at 4.30 am and said there was a good crowd. If the result is that people think about prayer and heaven then I`m sure it will have been a great source of grace.
Posted by Fr Michael Brown at 10:47 am

It's been very odd for me, with friends in Newcastle and having been there just a few months ago, to read about everyone going to see the relics there when I went to see them here in Warsaw. Very odd feeling indeed!

As a "bone-worshipper" I cannot but recall that the history of English Literature seems to have begun, more or less, with the tales of a group of pilgrims journeying to the bones of one of the cardinal's predecessors.

I do not think that Father Browns comment about the SSPX members was called for.

I can`t agree more, Patricius, but wonder why cardinal Hume made that decision.

Kenboy, I hope I was wrong but I have met followers of the SSPX who are verging on the schismatic. I thought only the priests and third order people are members.

Father Brown, before you call the SSPX schismatic have a look at this video -

and then tell me who out of the two types of priest I should go to for guidance.

Kenboy, I`ve seen that video and it appalled me too. However the choice is not between that and the SSPX. There are plenty of Catholic priests who are orthodox and in unambiguous communion with the Holy See. Let`s pray for a successful outcome for the talks between the SSPX and the Church this autumn.