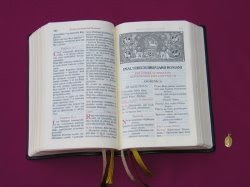 Eager as ever to take full advantage of the possibilities given by Summorum Pontificum, last week I took delivery of a set of 1962 breviaries from Southwell Books in the beautifully produced version by Nova et Vetera. I had been thinking about this for some time but the Ushaw conference and the FSSP retreat made my mind up.
I`m not sure I have got all the rubrics right at the minute. Where for example is the Gospel passage and commentary for the Eighth Sunday after Pentecost? I`ve searched the whole book and can`t find it. I looked at an older edition of the breviary from the 40`s and couldn`t find it there either. It`s also a pity that there is no second nocturn on a Sunday, so no patristic commentary on the readings from the first nocturn.
I switched over on the feast of Mary Magdalene. I say Matins and Lauds before Mass and Prime and Terce afterwards and that is working well at the minute. It`s hard to give any balanced opinion at the minute as there is still a novelty value in the whole thing. A disadvantage will be that the calendar for the breviary is very different from that for the Ordinary Form in which I say Mass most days but on the other hand it`s good to feel more connected to tradition. ( No doubt the Old Believer would tell me that the 1962 breviary is an abomination and no serious Catholic would contemplate anything other than the pre-Pius X breviary.)

I have always said the Latin version of the Paul VI breviary so I`m finding the odd differences in translation of the psalms quite interesting and mean to look them up and understand the differences. At this rate I may be blowing the dust off my Hebrew Bible although since it is twenty-two years since I read Hebrew seriously I don`t think I`ll remember much of it. Also I`m happy to work with the Urban VIII versions of the hymns and haven`t as yet found them hugely irritating as I don`t know them at all but might buy the supplement with the more ancient versions eventually.
Posted by Fr Michael Brown at 10:26 am

The Gospel passage and commentary (third lessons) for the Sundays from the seventh Sunday after Pentecost onwards are on p. 344 ff.

Many thanks Gregor. That is very useful. I was also wondering about the antiphons for the Benedictus and and second Vespers!

Glad I could help (I had the same question with two other priests here in Berlin recently, who also changed to the old Breviary two weeks ago!). The reason for the splitting up of the texts is that while the Gospel (and thus the homily and the antiphons for the Benedictus and the Magnificat of second Vespers) continues to be assigned to the "nth Sunday after Pentecost", from August onwards (and the seventh Sunday after Pentecost is the earliest possible to be in August), the Scriptura occurrens of the first two lessons is assigned to a secific Sunday of the month (e.g. second Sunday of August etc.).

Sorry to hear it has been 22 years since you last looked at your Hebrew Bible seriously. But believe me, it is nevery too late to learn (or re-learn) Hebrew. It will come back to you quickly if you try. What could be more awesome and spiritual than reading the words of Almighty God written in the Hebrew Scriptures? Jerome would be proud of you if you start reading your Hebrew Bible again.

I quite like the new vulgate psalms. I do wish they hadn't made some of the changes they did make (putting in neuters for feminines in some places, that sort of thing), and in one or two places the old vulgate phrasing is so stuck in my head I just say it, but (to my very amateur Latin palate) the taste is very similar to the old translation. Unlike the Pius XII ones!