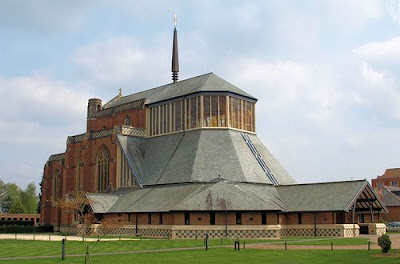 Last night I got back from a priests` retreat at Douai abbey in Berkshire which was given by Fr de Malleray of the FSSP. It was a very good week. We were only a small group, smaller than I imagined. It was good to see that 60% of the retreatants were former Ushaw students! Fr Michael Clifton was there, although not very well, as he explains on his own blog.
The first few conferences were on the nature of God, Man and the redemption before we were given reflections on the Ordinary of the 1962 missal. I`m glad I made notes as there were useful points which I hope to profit from in my own preaching. I must confess that I had imagined there was going to be something on St John Vianney but his role was more as a patron of the week and Fr de Malleray is considering doing something to do with Ars next year.
The retreat was silent so it wasn`t until yesterday after the retreat that we were able to have a good chant with Fr De Malleray and exchange stories about how Summorum Pontificum is being implemented. I won`t mention the other retreatants as they may not wish their identities to be revealed.
Apart from attending (Latin) vespers in the abbey we didn`t have much communication with the community apart from Br Christopher, the guest-master, who looked after us very well. It was rather complicated at times to ensure that we had the guest refectory to ourselves so that we could have reading during meals but on one occasion the other guests were treated to our reading of the Council of Trent on the Eucharist. I had hoped to talk with the abbot, Fr Geoffrey Scott, who is from Birtley (where I was a curate in 1989-1990), and who I`ve met enough times over the years for him to recognise me. We did manage to have a quick chat on the way to vespers on our first night however.
So it`s back to the parish. I will be blowing the dust off my copy of Blessed Columba Marmion`s Christ, the Ideal of the Priest, at which I made an unsuccessful stab on my pre-priesthood retreat at Ampleforth in 1988. We had readings from it at meals on the first day which I enjoyed.
As we were preparing to leave in convoy for lunch at the Berkshire Arms, I was sorry to have missed the chance to meet Fr Ray Blake who was at Douai that day. (I`ve used his picture of the abbey church.)
So all in all I`m looking forward to next year.

Sorry to have missed you too.

Why might some of the priests not wish it to be known that they had attended a retreat?

Sharon, it`s just a matter of courtesy: I wouldn`t mention people on a blog unless their activity is already public or I have asked their permission to mention them, At least that is what I try to do.

The abbey church looks to be a strange hybrid sort of thing; it would be nice to see an inside view. The left-hand side of the picture reminded me straight away of the (Redemptorist) church of St Benet in Sunderland, built, I think, around 1900. It's as though an older part of the church has been sliced in half and a new bit added in 1970s sort of style with prominent roofs.
Not that I'm any sort of expert on architecture...

Frank E you do not have to be 'any sort of expert on architecture' to recognise a truly awful structure such as Douai. But, I suppose a view of the inside might (just might) make a better impression. Downside, inside and out, is, of course, even worse. I can only think that monks are maybe so engrossed in things spiritual that they fail to see what the, er, 'architect' has created ('made' rather than 'created' I suppose).